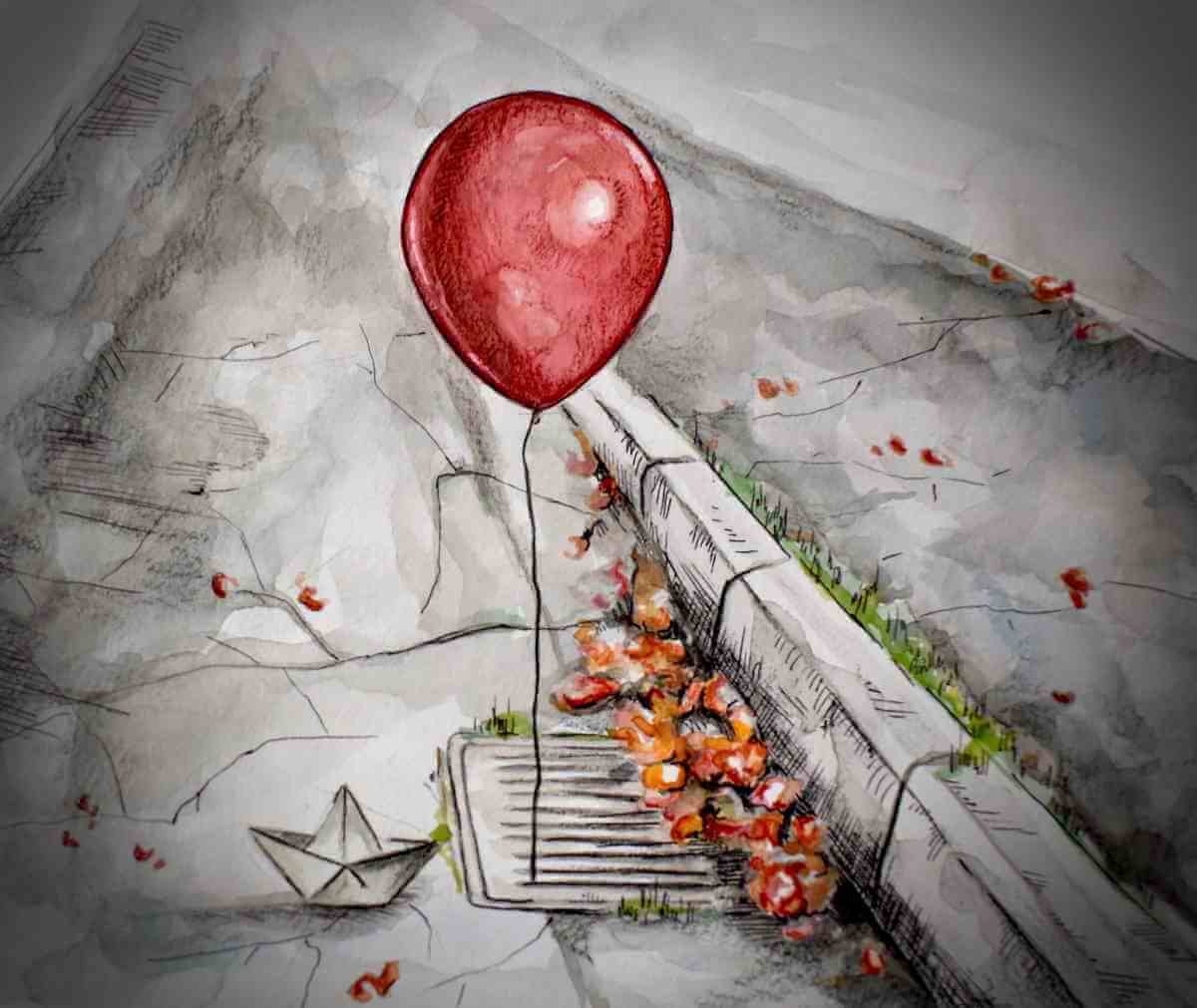 To this day ‘It’ remains one of Stephen King’s best-selling horror books. ‘It’ earned its horror attribute by making a clown an agent of terror and mass bloodshed.

‘It’ readers will find themselves in a world where a funny clown turns into a rampaging vicious killer. The book cuts across two eras as readers experience both time eras separated by a span of twenty-seven. What makes ‘It’ so interesting is that its protagonists are 11-year-old children forced to face a monster as old as the universe itself.

‘Spoiler-Free’ Summary of It

‘It’ begins with two brothers Bill and George making a boat so they can play with it. Bill, the older brother, stays at home due to being sick after the heavy rainstorm that occurred in Derry. George goes out to play with his new boat and gets killed by a clown who called himself Pennywise. Set to uncover the truth behind his brother’s death, Bill goes on an investigation after encountering Pennywise in the form of George’s ghost.

Along with six other children who also had an encounter with Pennywise in different forms, Bill forms a group known as the losers club. The group comprising of Bill, Eddie, Beverly, Ben, Richie, Mike, and Stan, uncovers the secrets of an ancient evil that had always been in Derry. Calling it ‘It,’ They set out on a mission, to get rid of the evil terrorizing Derry. The group then makes a promise to return if It ever showed up again.

Twenty-seven years later, It wakes up, and Mike calls the group together for one last mission, the mission to get rid of the monster once and for all. The group of once children now adults meet again, and decide to go after the evil that has terrorized Derry before it even existed.

‘It’ is a complex story that cuts and alternates two timelines and spans twenty-seven years.

In October of 1957, Bill Denbrough and his brother, George make a boat as George runs off to play with it leaving a sick Bill behind. While playing, George’s boat gets washed down the drain, and he notices a clown in the drain. The clown introduces himself to George as Bob Gray, also known as Pennywise, the dancing clown. Pennywise tries to lure George with the promise of goodies, but he refuses, then Pennywise tells him to reach out to get his boat. George agrees, and when he puts his hand to reach for his boat, Pennywise draws him in and ends up ripping off his hand, killing him.

June, the following year, Ben Hanscom, an 11-year-old overweight boy, gets picked on by a group of bullies led by Henry Bowers. They try to hurt Ben by carving on his stomach with a knife, but Ben luckily escapes and hides where he meets another boy called Eddie Kasbrak, a hypochondriac who believes he had asthma. They become friends and later meet Stan Uris, a Jewish boy, Richie Tozier, a jokester, Beverly Marsh, and Bill Denbrough, George’s brother. Together they form a club calling themselves the Losers club.

Later, Henry chases Eddie into the barrens after he revealed he was the one who had poisoned Mike’s dog. The rest of the Losers club came to Eddie’s rescue as they fought off Henry, they win, and Henry leaves promising revenge. Soon, the Losers club finds evidence from Eddie’s narration of a prehistoric bird chasing him that the entity they were facing was an ancient monster that had been in Derry for centuries, if not millennia.

The group decides to find out the exact origin of It as they performed a special ceremony done by native Americans. Mike and Richie were able to find out the origin of the entity. The shocking revelation they made leads them to discover that It was millions of years old, and it landed as a fireball that fell from the sky. They also find out It sleeps for twenty-seven years before awakening to feed on people for a whole year.

Later in July of 1958, Eddie has his arm broken by Henry and is hospitalized for it. Beverly witnesses a grueling scene where Patrick, one of the boys in Henry’s gang, gets killed by weird blood-sucking monsters, an alternative form of It. She alerts the group, and on reaching the scene, they find a message from It telling them not to interfere with him else they die. Now determined to kill It, Ben makes two slugs from silver coins hoping that they can injure It with silver.

It decides to tell its history as it brags to readers of its origin. It explains that he is an entity that was as old as the universe. He says that he existed between the void that separated our universe from others, the void he called the macro verse. It boasts of his superiority and why he prefers to kill children, with his reason being it was easier for him to come in the form children feared the most, and that fear only made his prey tastier.

The Losers club later gets attacked by It, who took the form of a werewolf. The group gets the upper hand as they injured It with the silver slug Ben had made. Now seeing them as a real threat, It sends Henry after the group giving him a switchblade. Henry kills his father with the blade and goes down the sewers with his sidekicks, Belch and Vic, with the hope of ending the lives of the Losers club, who were also down the sewers trying to kill It.

In the sewers, Henry and his sidekicks encounter an alternate version of It in the form of Frankenstein. Their encounter with It leaves Vic and Belch dead. Henry escapes death but gets caught by authorities who blame the deaths of children on him; the authorities send him to an asylum.

Later on, Bill discovers a ritual known as the ritual of Chud, which allowed him entered the macro verse. There he meets another ancient entity, Maturin, and is made to understand that Maturin created the universe from his vomit after a stomach ache. Maturin tells Bill the only way he can defeat It was in a battle of wills. Teaming up with Maturin, Bill conquers It, sending him back to sleep. After the battle with It, the group gets lost, and Beverly has sex with the entire group to bring back unity. The group makes a blood promise to come back to Derry should ‘It’ awaken.

Twenty-seven years after they first defeated It, another tragedy occurs in Derry. In July 1984, at the annual canal day festival, a gay man named Adrian Mellon is attacked and thrown off a bridge by three teenagers who had sworn to get revenge. Adrian dies and during interrogation, one of the boys stated they had seen a clown in a silver suit drag Adrian under the bridge. Don Hagerty, Adrian’s boyfriend also confessed to seeing the clown but was advised to withhold his story.

With the death of Adrian, a string of deaths start happening in Derry again. Mike, who was still in Derry believed it was the work of non-other than It. Mike calls the group again, reminding them of the promise they made to return should It wake up again. The group now all grown up with Bill a successful horror writer and married to Audra, his actress wife, Beverly, a fashion designer in Chicago married to an abusive husband called Tom Rogan, Richie, a disk jockey living in Los Angeles, Ben, a successful architect living in Nebraska, Eddie in New York where he owned a limousine rental company, and Stan Uris, a wealthy accountant in Georgia receive Mike’s call.

They all agree to return except Stan, who kills himself by slitting his wrists and writing ‘It’ on the wall with his blood. Beverly escapes for Derry as she fights Tom, who tries to beat her. The club meets at a restaurant where Mike refreshes their memory of how It wakes up after twenty-seven years and starts a killing spree. The group then finally decides to get rid of the monster once and for all.

The group decides to explore Derry to refresh their memory. While re-exploring Derry, Eddie, Richie, Beverly, and Ben face different forms of It, with Beverly facing the witch from Hansel and Gretel, Ben Dracula, Eddie Belch Huggins in leper form, and Richie facing Paul Bunyan statue.

Unknown to the club, three people, Audra, who was worried about Bill, Henry, who escaped from Juniper Hill Mental Asylum, and Tom Rogan, who wanted to punish Beverly, arrive in Derry. Henry and Mike fight in the library, leaving both of them injured and Henry escaping. Henry is then given a lift to where the losers club stayed by the rotting corpse of Belch Huggins, who orders Henry to kill them all. In another violent confrontation with Eddie, Henry dies, leaving Eddie with a broken arm.

It orders Tom Rogan to kidnap Audra and bring her to him. On seeing It’s final form; a giant spider, Tom dies of shock, and Audra enters a catatonic state. The group learns that Mike is on the verge of death, and knows they will have to face It once again. The group sends energy to Mike as he fights a nurse possessed by It. Using the ritual of Chud, Bill and Richie enter the monster’s mind but get lost. As a last resort to save both of them, Eddie sprays his aspirator on It, but It kills him by biting his arm off.

It runs away to tend to its wounds, but Bill, Richie, and Ben chase after it. They find it laid eggs and discover It might be a female, Ben stays behind to destroy the eggs. Bill then fights his way inside It’s body locating its heart and killing it finally.

The group had to abandon Eddie’s body behind as they carried Audra to safety. On making it to the surface, the group realizes that the scars on their hands were gone meaning they had defeated the monster finally. A storm sweeps through Derry, making the downtown area collapse. Finally, the group goes their separate ways once again, with Richie returning to Los Angeles, Ben and Beverly falling in love and leaving together, and Mike starting a new life elsewhere.

Bill decides to take a catatonic Audra on a ride on silver, his old bike. Audra awakens from her catatonia with the power of belief.

It ended with the losers club defeating the monster, Henry Bowers getting killed by Eddie, Ben and Beverly falling in love and leaving Derry together, and Bill awakening a catatonic Audra after he took her on a ride on silver, his old bicycle.

What exactly was Pennywise?

Pennywise was an alternate form of an entity that was as old as our universe and existed in a place called the macro verse. The entity came to Earth landing in Derry where it decided to attack children by coming in the form of their fears. The Losers club called the entity It.

What made It evil?

It was always evil since its creation.

Is Pennywise an alien?

Yes, Pennywise also known as It was an entity that arrived on Earth long ago. He was sealed through the ritual of Chud by native Americans.

Is It male or female?

It was referred to as a male throughout the story, however, with the discovery of its laid eggs, the losers club deduced it to be female.