The characters in ‘The Cather in the Rye’ by J.D. Salinger are mostly young, vibrant, and fleeting. They pass in and out of Holden’s life as he drifts from place to place.

As seen from Holden’s perspective, they are mostly vapid, uninteresting, and worthless. But, without his cynical point of view, they are truly multilayered, troubled, and representative of various classes, outlooks, and ways of life. 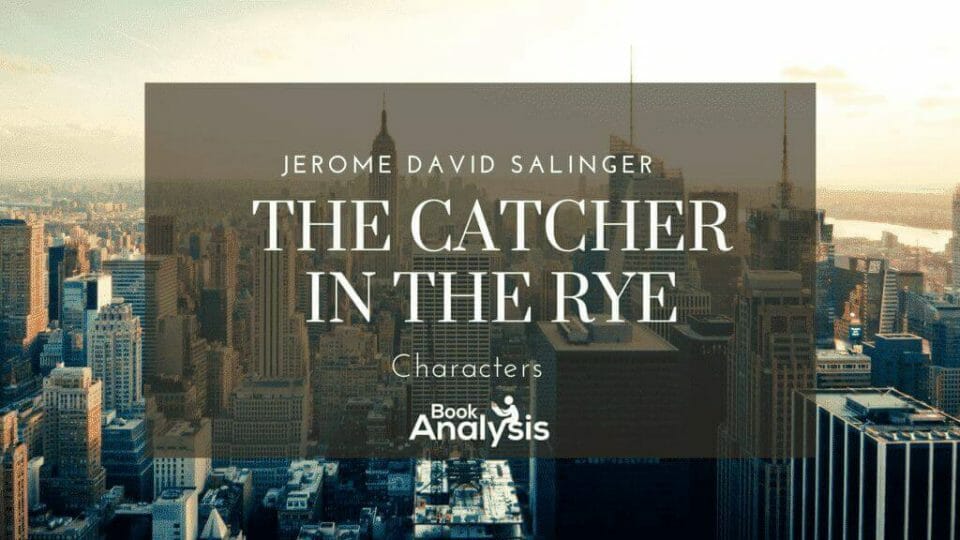 The narrator of The Catcher in the Rye. He’s a sixteen-year-old boy who was recently expelled for academic failure. Holden begins the novel in a liminal space between childhood and adulthood. He has one foot in each and is trying to navigate the space. Through his narration, a reader comes to see the world through his eyes. He expresses cynical, but intelligent opinions about the hypocrisy and pain around him. Some of Holden’s criticism is self-directed. He has trouble in social situations and often displays similarities in his personality to those he dislikes. Holden also suffers from depression.

Holden’s roommate at Pencey Prep and a popular, good-looking guy popular with women. He’s full of confidence, is clearly conceited and Holden refers to him as a “sexy bastard”. But, he also has an undeniable kindness that endears him to Holden. A change occurs in their relationship after Ward announcers his date with Jane Gallagher, someone Holden cares deeply about. Holden is offended when it becomes clear Ward is only interested in Jane because he’d like to have sex with her. The two get into a fight after the date, Ward wins, and it is this series of events that inspire Holden to leave school and travel to New York in the middle of the night.

Holden’s neighbor at their school Pencey Prep. He is an insecure, annoying boy with terrible hygiene habits. It is in part due to Ackley’s irritating behavior and rude way of treating those he’d rather have like him, that Holden leaves Pencey Prep after the fight with Ward.

A student Holden knew while attending Elkton Hills. Castle killed himself rather than give in to a group of bullies who were locked inside his room with him. This action earned Holden’s respect.

The “biggest bastard” at Pencey Prep and son of a woman he meets while on the train to New York.

The mother of Ernest Morrow, a fellow student at Pencey Prep. She’s attractive and middle-aged. Holden attempts to flirt with her but is turned down.

An older man who taught history at Pencey Prep. He invites holden to his house and tries to help him figure out how to handle his own life. During this visit, Holden reconfirms his fears of growing old.

Holden’s mature, ten-year-old sister. She gives Holden good and thoughtful advice in The Catcher in the Rye. Phoebe tries to help Holden come to terms with the way he feels about the world at large and let some of his cynicism go. It is due to her influence that Holden decides he’s finally going to take on some responsibility. There is an interesting contrast between his sister’s caring and appreciated advice and that which comes from Holden’s hated teachers.

Holden’s brother who died when he was thirteen. He was a smart young boy, altogether the perfect child, When he died Holden was unable to attend the funeral because he was in the hospital nursery his cut hands.

Holden’s older brother. He fought in World War II and is now an author with many successful short stories. Holden fell out with his brother after he started writing movie scripts, something Holden saw as disingenuous and cheap.

Holden met Jane in Maine when their mutual families were vacationing there. She’s kind, thoughtful, and unfortunately attending a different school that Holden. She never physically appears in the book but is pivotal in the fight that leads to Holden leaving Pencey Prep. Holden holds her in his mind as the perfect woman, someone he would love to know better but is unable to reengage with. This is in part due to his own shyness, but also his unwillingness to have his perfect image of her shattered.

Sally is another girl with whom Holden has cared for. She is in New York when he arrives, and despite his lack of respect for her, he decides to meet up with her. Holden feels somewhat uncomfortable in her presence but in his desire to be around people, he tells her that he loves her. They spend more time together, ice skating, and watching a movie, but Holden gets frustrated when she does not understand or support his view of the world.

Holden calls Faith, who is a former stripper when he arrives in New York City. He thinks he’d like to see her as he’s heard that she enjoys sex. Rather than meet him that night, she offers to get a drink with him the next day. He rejects this offer and hangs up.

One of Holden’s older peers, and a mentor at the Whooton School. He shared with Holden and other boys stories about his sexual adventures. Holden has thought in passing that Luce might be gay, due to his uncanny ability to point out others who were. He calls Luce when he’s in New York. The two meet and do not get on.

The elevator operator and pimp Holden met on his first night in New York. He sends a $5 prostitute to Holden’s room. He does not have sex with her, but she demands that he owes her another $5. Holden doesn’t pay, and Maurice comes into the room, punches Holden, and takes the money himself.

One of a number of young people Holden meets in New York. She and her friends disinteresting in him as they are obsessed with the frivolous things Holden hates so much. They dance and then force him to pay for all their drinks.