The Ballad of Songbirds and Snakes Summary 🐍

‘The Ballad of Songbirds and Snakes’ is a 2020 novel by Suzanne Collins. The novel is a prequel and spin-off to the ‘Hunger Games’ Trilogy. 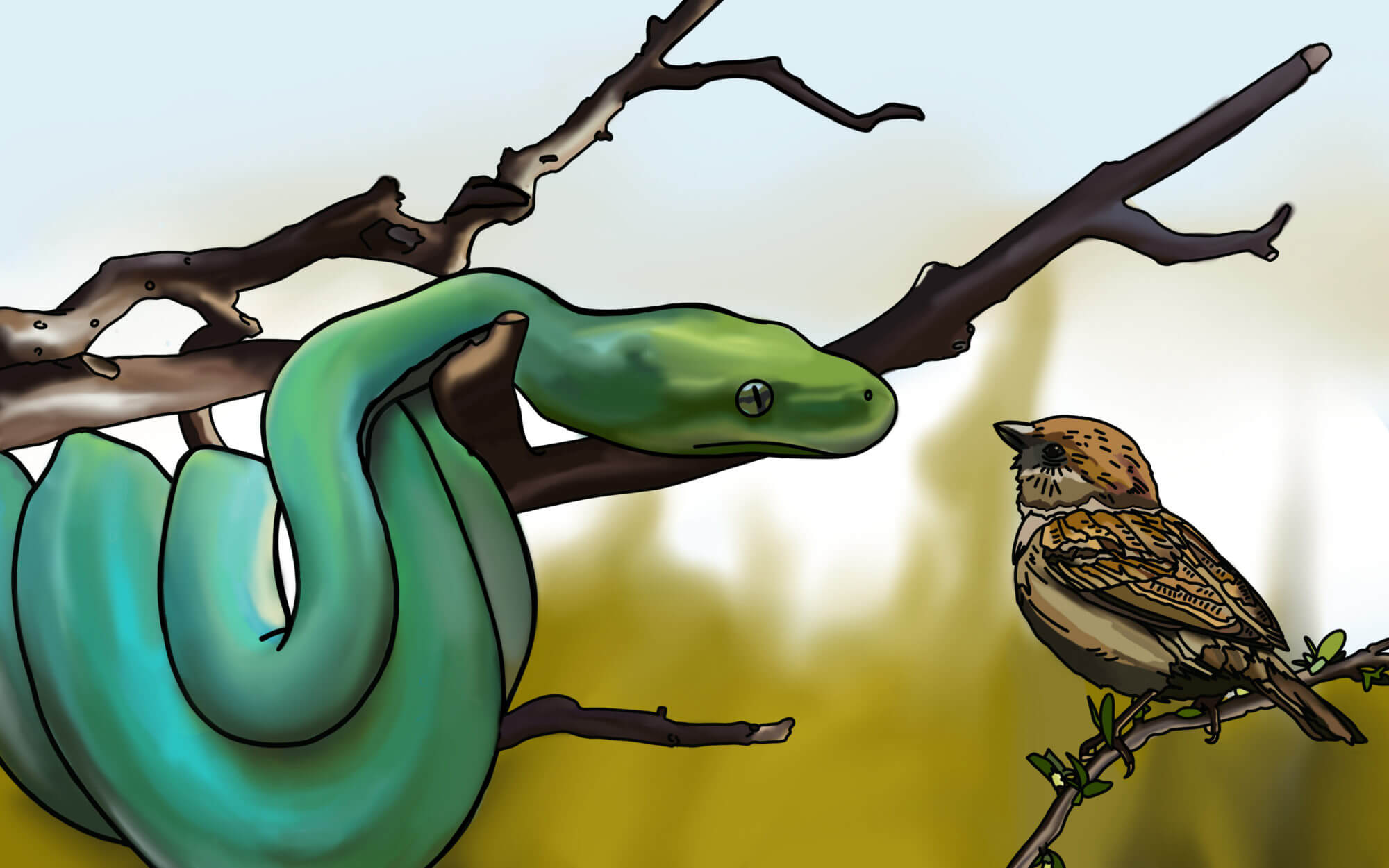 It follows the story of Coriolanus Snow as he is made the mentor to Lucy Gray Baird in the tenth Hunger Games.

‘Spoiler-free’ Summary of The Ballad of Songbirds and Snakes

18-year-old Coriolanus Snow is about to become a mentor in the tenth Hunger Games. He needs a victory badly – both to return his fallen house to glory and to fund his tuition fees for the university. But to his disappointment, he is assigned to Lucy Gray Baird, the tribute from the poorest district in Panem.

Refusing to give up, Coriolanus tries to make the best of the situation. He attempts to learn more about Lucy Gray, to help her survive in the arena. In the process, he falls in love with her – only to leave her to her own devices in the Hunger Games, amongst other brutal and starving tributes.

The Ballad of Songbirds and Snakes Summary

Spoiler alert: important details of the novel are revealed below

It is the day of the reaping for the 10th Hunger Games. Coriolanus Snow is one of the 24 students who have been picked for the mentorship program from the Academy. He is hoping to earn a victory for himself and restore his fallen house to glory. A victory in the Hunger Games will also provide him with tuition fees for the university. However, to his dismay, Coriolanus is assigned to the district 12 tribute, Lucy Gray. Dean Highbottom taunts him for his pathetic assignment.

Coriolanus finds out that Lucy Gray may be a fighter after all. During the reaping, she puts a snake down another girl’s back and sings a song. Tigris, Coriolanus’ cousin, and the Grandma’am, his grandmother, tell him to go meet his tribute when she arrives at the Capitol. However, things do not go according to plan. Coriolanus is taken in a cage at the back of a truck and is dumped into the zoo along with the other tributes. He receives a demerit from the Academy for breaking the rules.

Over the next few days, Coriolanus gets to know more about his tribute. He and Sejanus Plinth, his classmate, feed the tributes when they discover that they are not being fed. Coriolanus resents Sejanus for having bought his way into the Capitol, but as the two of them begin spending more time with each other, they are deemed best friends by others.

Coriolanus has regular classes with the Head Gamemaker, Dr. Gaul. Dr. Gaul sets the students an assignment to make the Games more interesting. That day, one of the mentors, Arachne, is killed by her tribute for taunting her with food. The rest of the class is too distraught to complete the assignment. Coriolanus finishes it on his own.

Clemensia, Coriolanus’ classmate, lies to Dr. Gaul and says that she worked on the assignment too. Dr. Gaul catches her in the lie when genetically modified snakes bite her, and Clemensia is taken to the hospital grievously injured.

Coriolanus sings the national anthem at Arachne’s funeral. Arachne’s tribute is hung from a crane and paraded down the street. The mentors and the tributes visit the arena to stake out the place. A rebel bomb goes off, and several of them are killed or wounded. Lucy Gray saves Coriolanus’ life by pulling a burning beam away from him. The tribute from District 2, Marcus, escapes.

The mentors prepare their interviews for TV interviews. At the interview, Lucy Gray sings a song about her lover in the district, making Coriolanus jealous. The night before the Games, he gives Lucy Gray his mother’s compact and tells her to fill it with rat poison. Coriolanus and Lucy Gray kiss passionately.

The 10th Hunger Games begin and Dr. Gaul has implemented several of Coriolanus’ suggestions. People in the Capitol can now bet on their favorite tributes and send them food in the arena. To everyone’s horror, Marcus has been caught and he is hanging in the arena from his wrists. He is still alive. The Games go as planned, and tributes begin killing each other.

Coriolanus returns home to find Sejanus’ mother waiting for him. She informs him that his friend has gone missing. They soon find out that Sejanus has entered the arena and is attempting to block Marcus, his tribute and classmate from District 2, from further harm. Coriolanus goes to retrieve him. The two of them are almost killed by the tributes in the arena. Coriolanus escapes by bludgeoning a tribute, Bobbin, to death. Dr. Gaul tells him that humanity in its truest form is revealed in the arena. That is, she believes that humans are naturally violent.

The Games continue, and Lucy Gray emerges as a victor. Instead of being awarded for his victory, Coriolanus is punished for breaking the rules with his mother’s compact and helping Lucy Gray underhandedly in the arena. Dean Highbottom forces him to join the Peacekeepers.

Coriolanus transfers to District 12, where he hopes to meet Lucy Gray. A week later, Sejanus arrives as punishment for his antics in the arena. He has managed to graduate, while also securing a diploma for Coriolanus. The diploma will allow Coriolanus to become a military commander like his father.

The Covey, the traveling troupe that Lucy Gray belongs to, holds regular shows at the Hob. Sejanus slips out of one such show to meet his rebel friends, Spruce and Billy Taupe (Lucy Gray’s ex-boyfriend). Coriolanus follows Sejanus and tries to dissuade him from escaping. The Mayor’s daughter, Mayfair, who is now dating Billy Taupe, overhears them and threatens to expose them. Coriolanus shoots Mayfair, and Spruce shoots Billy Taupe in the resulting brawl.

Sejanus is hanged for treason, along with Spruce. However, no one has apprehended Coriolanus for his involvement in the murders yet. Coriolanus thinks that he is going to be executed any day for having murdered the Mayor’s daughter, and makes a plan to run away with Lucy Gray, who is being held responsible for Mayfair’s murder.

The next day, Coriolanus is told that he has been promoted to an Officer. He is to leave for an elite training program the next day. Nevertheless, Coriolanus runs away with Lucy Gray, only to discover that there is more to life than mere survival and that he hates nature.

Coriolanus and Lucy Gray set up camp in the cabin in the woods, where Coriolanus finds the bag of weapons the rebels had been collecting. Among them is the gun he used to kill Mayfair. Realizing that he can return to his former life by drowning this last shred of evidence connecting him to the murder, Coriolanus heads to the lake. He calls out for Lucy Gray, but she does not answer.

Coriolanus realizes that Lucy Gray now knows that he betrayed his friend, Sejanus. She does not trust him anymore. Coriolanus further realizes that he does not like being in love because it makes him weak and vulnerable. He shoots in the direction of Lucy Gray’s voice. Without checking to make sure the bullet had connected, Coriolanus heads back to base.

In a sudden turn of events, Coriolanus returns to the Capitol instead of going to the elite training program. Dr. Gaul informs him that he is going to study under her at the University.

Several months later, Coriolanus goes by his last name, Snow. Sejanus Plinth’s family have named him as the heir to their munitions empire, which will save the Snows’ reputation and provide tuition for university. Snow does not care about what happened to Lucy Gray.

Coriolanus does not react to this information. He throws Sejanus’ medications and morphling into the trash and leaves. He has laced the morphling, which Dean Highbottom regularly uses, with rat poison.

How did Lucy Gray spend her time?

Lucy Gray Baird belonged to a traveling troupe named the Covey. As a part of the Covey, Lucy Gray used to spend her time writing songs and singing them.

What is the name of President Snow’s granddaughter?

President Snow’s granddaughter is called Celestia Snow. She is the daughter of Julianus Snow (Snow’s son) and Drusilla Snow and Agrippina’s sister.

What disease did President Snow have?

President Snow suffered from chronic mouth sores. This is because he used to consume the drinks spiked with poison that he would provide potential rivals with in order to allay suspicion before killing them.

Why does President Snow always wear a rose?