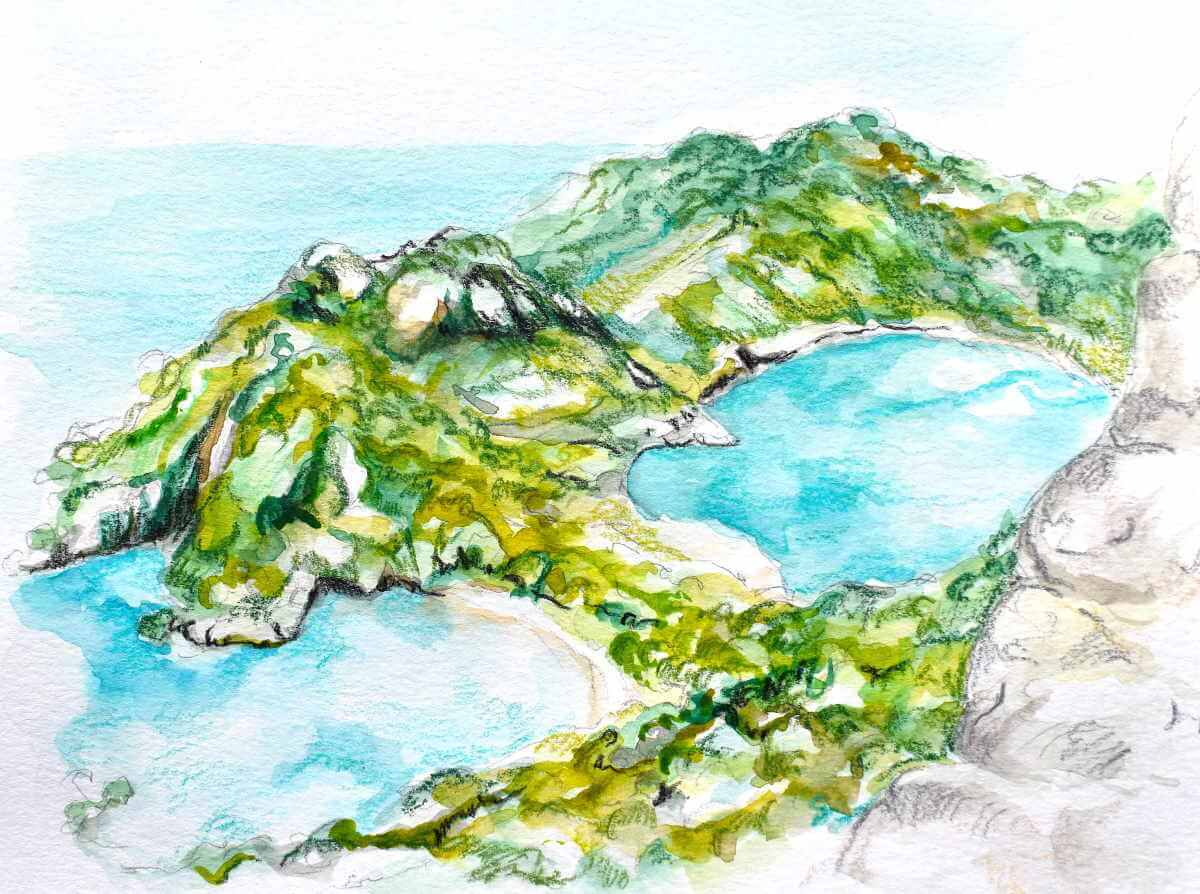 ‘Treasure Island’ has some of the memorable and most impressive lines which set the story going and explains various themes of the novel.

The novel’s protagonist meets with an opportunity for adventure in an odd situation. However, during this journey, he learns about life and himself. He remains loyal to his friends despite all the adversities faced.

“Seaward, ho! Hang the treasure! It’s the glory of the sea that has turned my head. So now, Livesey, come post; do not lose an hour, if you respect me.”

These lines express the desire and excitement of the character Squire Trelawney. After successfully setting up Hispaniola and crew members for their journey to Treasure Island in Chapter VII, Trelawney writes a letter to Dr Livesey. The squire’s excitement is a clear portrayal of the desire for adventure and sea voyage. He explicitly presents the spirit of the time R. L. Stevenson has written the novel.

“It’s a pleasant thing to be young, and have ten toes, and you may lay to that.”

In Chapter 12, when the ship comes to the island’s vicinity, Long John Silver describes Jim Hawkins the thrilling experiences that await him. As he speaks of the opportunity of climbing, swimming, and exploring, he feels nostalgic for the time when he would have done the same. However, having lost his leg, he could wish but do it. Clearly, these lines explain his underlying desire for exploration. Had he not found the truth about the evil intentions of this one-legged man, Jim would have excited equally over this possibility of all the fun he could get.

Coming of Age and Self-Discovery

“I scarce can say it was by my own volition, and I am sure it was without a conscious aim—both my pistols went off, and both escaped out of my hands. They did not fall alone; with a choked cry, the coxswain loosed his grasp upon the shrouds and plunged headfirst into the water.”

This incident happens in Part V, Chapter 26, where Jim finally does an unbelievable thing where he ends up causing the death of Israel Hands. Jim describes, until that moment, he had no intention of killing or attacking him. Nevertheless, unbeknownst to him, he has become a man who can take responsibility for saving himself. Thus, in self-defense, Jim fires at Hands, aiming to kill him. From the beginning of Treasure Island, Jim was acting on a whim, but at this point, his action has saved him. At the same time, he has realized that knowingly or unknowingly, he has saved himself.

“I am not such a fool but I know pretty well what I have to look for. Let the worst come to the worst, it’s little I care. I’ve seen too many die since I fell in with you. But there’s a thing or two I have to tell you,” I said, and by this time I was quite excited; “and the first is this: here you are, in a bad way—ship lost, treasure lost, men lost, your whole business gone to wreck; and if you want to know who did it—it was I . . . . . I no more fear you than I fear a fly. Kill me, if you please, or spare me. But one thing I’ll say, and no more; if you spare me, bygones are bygones, and when you fellows are in court for piracy, I’ll save you all I can. It is for you to choose. Kill another and do yourselves no good, or spare me and keep a witness to save you from the gallows.” (Chapter 28)

Jim Hawkins, at this moment, courageously stands up to Long John Silver and persuades him into saving his life. He makes a deal like a man with Silver. He confronts him and tells him to choose between right and wrong. Further, he foretells what would happen in the end and suggests that Silver mutually helps each other in such a dire situation. Then, he boastingly reveals all the things he has been doing to fail them in all their doings. Compared to the time Jim was scared of Silver and his crew, the incidents from the previous chapters have shaped him into a man with growing maturity.

“The bar silver and the arms still lie, for all that I know, where Flint buried them; and certainly they shall lie there for me. Oxen and wain-ropes would not bring me back again to that accursed island; and the worst dreams that ever I have are when I hear the surf booming about its coasts, or start upright in bed, with the sharp voice of Captain Flint still ringing in my ears: ‘Pieces of eight! pieces of eight!’.”

Jim summarises his feelings about his adventure in these final lines of the chapter. Ironically, by the end of the novel, Jim realizes two things. Firstly, he does not want the treasures and feels it is better to leave them the way they are buried. Secondly, Jim realizes that he does not want adventure. Though, in the end, everything has worked out well for Jim, he calls the island “accursed”. Even after years, he is plagued by nightmares of treasure and Silver’s parrot screeching ‘Pieces of eight! pieces of eight!’.

“In the immediate nearness of the gold, all else had been forgotten: his promise and the doctor’s warning were both things of the past, and I could not doubt that he hoped to seize upon the treasure, find and board the Hispaniola under cover of night, cut every honest throat about that island, and sail away as he had at first intended, laden with crimes and riches.”

The whole story of Treasure Island starts with a man’s greed followed by the greed ignited to secure the treasure buried on a strange island. These words of Jim in Chapter 32 are a see-through of the true intention of Long John Silver from the beginning he started his journey as a crew member on Hispaniola. Though Jim and Silver agreed in the previous chapter, at this moment, as they were as close as to the treasure, Jim could only suspect Silver as a ruthless pirate than trusting him to keep up his promise.

Choosing between Good and Evil

“My heart was sore for him, wicked as he was, to think on the dark perils that environed and the shameful gibbet that awaited him.”

Jim was worried to see Long John Silver as he tried hard to soothe his pirates with the possibility of getting the gold while he was thinking of a way to help Jim and his friends escape the Island which would help him to save his life. Jim seems to be on the good side as he thinks of a way to help Silver. However, though Silver is a cunning fellow who works for his benefit, Jim couldn’t ignore his other impressive side, which induces pity.

“It was Silver’s voice, and before I had heard a dozen words, I would not have shown myself for all the world. I lay there, trembling and listening, in the extreme of fear and curiosity, for, in those dozen words, I understood that the lives of all the honest men aboard depended on me alone.”

Jim finds out the true intentions and identity of most of the crew members on the schooner. Also, it is time he understands and draws a clear line between good and evil. Though he was a young boy at the time, he acts impulsively and hides. Silver persuades Jim many times to join his crew. Still, he gets a cold shoulder.

Life of the Pirates

In the first chapter of the novel, this pirate song, sung by Billy Bones during his time in Admiral Benbow, explains how the pirates and rum are staunchly connected. This song, repeatedly used in the story, determines how the excessive use of the rum ruins the pirates’ life. Also, it encapsulates its wickedness in turning the pirates’ life topsy-turvy. In the novel, Billy Bones, Long John Silver, and Ben Gunn’s characters indicate the pirates’ constant drunkenness, which often leads to their failures, losses, and death. It is apparent when Dr Livesey warns Billy Bones, “If you keep on drinking rum, the world will soon be quit of a very dirty scoundrel!”

Used about three times in the novel, “Pieces of eight” refers to an old Spanish silver dollar. Jim hears it the first time in Hispaniola when Silver’s parrot cries “Pieces of eight”. Also, when Jim returns to the stockade in Chapter 27, the parrot shouts out “Pieces of eight,” which alerts the pirates of an intruder. Finally, in the novel’s concluding chapter, Jim describes how he still hears captain Flint screams out this name in his nightmares, which starts him from sleep.

“But what is the black spot, captain?” I asked.”

Chapter three, named “Black Spot”, introduces the readers to the popular culture of the pirates. The Black Spot holds significance among the pirates as it makes the receiver dread in fear. Billy Bones in chapter III and Long John Silver in chapter XXIV receive a Blackspot, respectively. As said by Stevenson, it is officially a verdict of guilt that summons the receiver or judgment, which could even be the person’s death, as in the case of Billy Bones. Long John Silver was informed of being “deposed” through the black spot.

What does the “dead man’s chest” refer to in Treasure Island?

The “dead man’s chest” symbolically refers to Billy Bones’ sea chest and Flint’s hidden treasure. As a part of the pirate’s song, it foreshadows the impending death and failure of the pirate’s mission. Ultimately, it refers to the way greed and desire for wealth and treasure lead men into losing their soul, also the eventual death in the end.

What is the meaning of “Pieces of eight” used in Treasure Island?

“Pieces of eight” refers to Spanish silver coins (pesos), which were named after its worth “eight reals”. At one time, it had an eight stamped on it. Later, the coin was cut up to resemble pieces of a pie. Once, it was circulated along with other hard currency in the American colonies.

What is the meaning of the phrase “dead men don’t bite”?

“Dead men don’t bite”, translated from the Latin phrase “mortui non mordent”, explains the wisdom of killing one’s enemies before they could attack. In the novel, the pirates feel that killing their victims will eliminate their enemies and any problems arising out in the future.