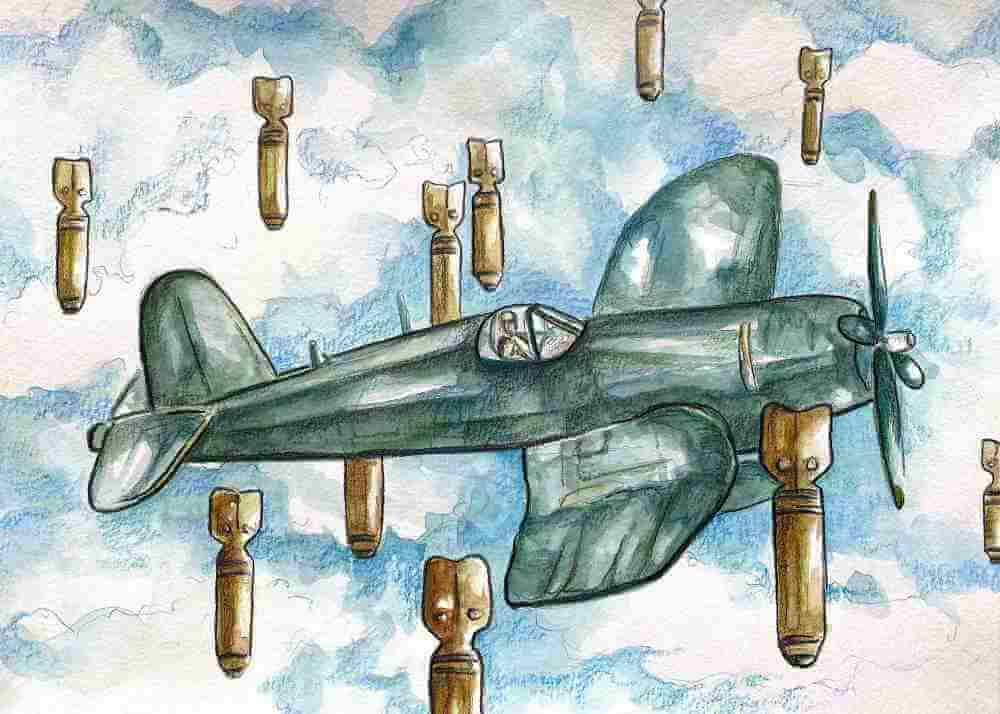 Throughout Slaughterhouse-Five, readers can find numerous compelling quotes about war, time, free will, and what’s in store for the human race in the future.

Throughout Slaughterhouse-Five, readers can find numerous compelling quotes about war, time, free will, and what’s in store for the human race in the future. Kurt Vonnegut and Billy Pilgrim how slightly different outlooks on life and in the lines of this novel, something that comes into play with Vonnegut voices his opinion as a narrator (such as in the fourth quote on this list). Whether one believes in free will or non-linear time, the concept of the latter is entrancing. Who wouldn’t find comfort in the idea that the dead really aren’t dead? Especially when faced with tragedies like World War II and the firebombing of Dresden, Germany.

This quote appears in the first chapter of Slaughterhouse-Five when Vonnegut describes taking his daughter and another young friend on a trip. While visiting one of Vonnegut’s war buddies, Bernard O’Hare, the author also spent time at the New York World Fair. There, he experiences a broad range of approaches to history and the future. This alludes to the nature of the novel and how time occurs at once. The fact that companies define the past and future is another aspect of this passage that’s important.

These are the last lines of the book. It ends just as Vonnegut informed the reader it would in the first pages. The bird’s question is unintelligible. It reemphasizes the entire point of the novel—war’s senselessness. There is no answer to the question of how to stop wars from happening. They’re going to continue. It’s just as easy to stop an iceberg, Vonnegut says at one point.

Time and Free Will

“If I hadn’t spent so much time studying Earthlings,” said the Tralfamadorian, “I wouldn’t have any idea what was meant by ‘free will.’ I’ve visited thirty-one inhabited planets in the universe, and I have studied reports on one hundred more. Only on Earth is there any talk of free will.

This is one of the most important quotes in the novel. It falls in chapter 4 when Billy recalls the time he spent with the Tralfamadorians. There, he learns about their philosophy of life and how they navigate the world and four-dimensional space. These creatures, which are described as two feet tall, in the shape of toilet plungers, with a single hand with an eye in the center of it, also don’t believe in free will. By saying that of all the worlds they visited, Earth is the only one where people speak of free will is captivating. It suggests that humanity is engaged in a collective delusion that no one else is suffering from.

The Tralfamadorians play an important role in the novel. It’s through their teachings that Billy comes to terms with life and death. He learns to see time as happening all at once. If someone is dead, they’re only in a bad way at that moment. In all others, they’re living their life as they always have. No one ever truly dies.

If what Billy Pilgrim learned from the Tralfamadorians is true, that we will all live forever, no matter how dead we may sometimes seem to be, I am not overjoyed. Still–if I am going to spend eternity visiting this moment and that, I’m grateful that so many of those moments are nice.

When considering what Billy learned from the Tralfamadorians, Vonnegut uses these lines. While for Billy, it was a revelation that changed his life, Vonnegut sees things differently. He’s more pessimistic but is still able to acknowledge that “so many of those moments are nice” that he’s going to live through (if Billy and the Tralfamadorians are correct).

A lot of patients who saw the prayer on Billy’s wall told him that it helped them to keep going, too. It went like this: “God grant me the serenity to accept the things I cannot change, courage to change the things I can, and wisdom always to tell the difference.” Among the things Billy Pilgrim could not change were the past, the present, and the future.

These lines appear towards the beginning of the novel when Billy is describing what it’s like to try to live like a Tralfamadorian in the human world. He believes that time is cyclical as they do, but he isn’t able to influence it. He finds himself “unstuck,” living his life out of order, and he can’t change anything about it.

There isn’t any particular relationship between the messages, except that the author has chosen them carefully, so that, when seen all at once, they produce an image of life that is beautiful and surprising and deep. There is no beginning, no middle, no end, no suspense, no moral, no causes, no effects. What we love in our books are the depths of many marvelous moments seen all at one time.

These lines are found in chapter 5 of the novel. Here, one of Billy’s captors in the Tralfamadorian zoo is trying to explain their literature. It becomes clear that this style of writing is something that Vonnegut tried to use in his novel. Due to the two very different ways of life, as mentioned in the last quote, this proves to be impossible. He’s brought together a series of moments in which there is no “beginning, no middle, no end, no suspense, no moral, no causes, no effects,” or so he thinks.

This is another quite well-known quote from the novel. It’s addressed to Vonnegut’s published, Seymour “Sam” Lawrence. Vonnegut is speaking about his manuscript and why it was delivered in such a state. It represents the same chaotic nature that war has. The birds say it best, “Poo-tee-weet?”