Two of the most prominent themes of ‘1984’ are totalitarianism and the self/mind. They are intertwined, with the former influencing and sometimes overtaking the latter.

Throughout the novel Winston battles for control of the “few cubic centimeters” inside his head and questions his own sanity. Let’s take a look at a few quotes and consider how they play into the larger themes of 1984. 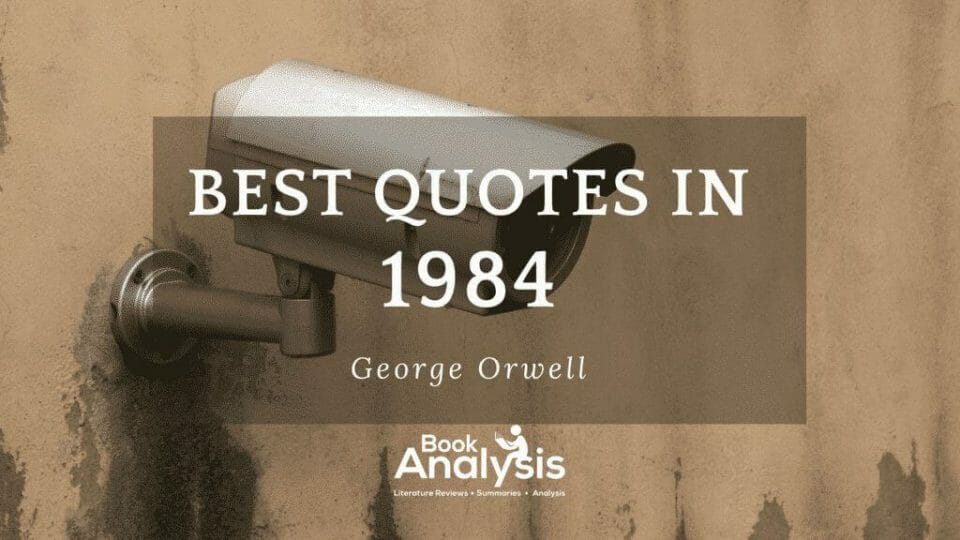 A very simple statement, but one that outlines the Party’s entire mode of operation. If they control the way their citizens look back on and consider their history, then they can train them to understand the present and future in a specific way as well. In 1984, this is seen through the use of “memory holes” into which every bit of unneeded or dangerous paper is shredded. Winston’s entire job revolves around remaking the past in order to tell a specific narrative.

When looking toward the future, and struggling under torture within the Ministry of Love, O’Brien attempts to crush any hope Winston might’ve had for a different world. He tries various tactics to convince Winston that his small rebellions are meaningless. They’re less than meaningless, he tells Winston, they are nothing. There is no future, O’Brien contends, in which the oppressed rise up. Instead, he offers:

“If you want a picture of the future, imagine a boot stamping on a human face—for ever.”

This terrifying quote speaks volumes about the way the Party considers its role in human affairs. They want to control every aspect of society and eventually, every thought that comes into one’s head. O’Brien, in his attempts to convince Winston that the Party is infallible and eternal, with unlimited power, speaks in the third chapter of part three of the novel of what “power” really is, he says:

“Power is in tearing human minds to pieces and putting them together again in new shapes of your own choosing.”

Power, O’Brien believes is achieved through making humanity suffer. “Obedience,” he goes on to say, “is not enough”.

Self and the Mind

As Winston battles against the Party in his personal way, having an affair with Julia, spending time in a rented room, buying antiques, and plotting rebellion of one kind of another, he also wages a war to maintain control of his own head. The Party takes its power most aggressively from the control of one’s mind and an overwhelming devotion to its principles. In the perfect system, no one would have a thought that wasn’t carefully curated, planted, and fostered by the Party.

Throughout 1984  Winston finds himself up against his peers and coworkers wondering if he is the only one who believes as he does. Is there anyone, he thinks, that is smart enough to see through the treachery and blatant lies the Party manufactures? These thoughts are treasonous in the world of 1984 and would, if the Thought Police knew them, get him vaporized. Sanity, and whether or not he is sane, weighs heavily on him. After reading part of Goldstein’s book he thinks:

“Being in a minority, even in a minority of one, did not make you mad. There was truth and there was untruth, and if you clung to the truth even against the whole world, you were not mad.”

Later on in the novel, in part three while Winston Smith is beginning to recover from the initial period of torture inflicted on him, he starts to understand that he isn’t going to be able to resist. His thoughts are going to fall under the control of the Party. It appears as though he is starting to obey, to learn, and accept what he has to do in order to make it out of the Ministry and return to society. But, he was unable to forget what he knew about the world and how the Party operates in it. He came to the conclusion that it wasn’t enough to control one’s features:

“If you want to keep a secret, you must also hide it from yourself.”

It’s only then, he thinks, that he’ll be able to get away with maintaining a will of his own. In one of the best-known, classic quotes from the novel Winston considers what he knows of the Party and the Thought Police as well as privacy and knowledge and states:

“Nothing was your own except the few cubic centimetres inside your skull. ”

Later on in the novel, once he underwent his period of torture at the Ministry, even this is no longer true. They enter into his mind, reorganize it and send him back out into the world remade.