There are many characters in George Orwell’s ‘1984’, such as Winston Smith, Julia, O’Brien, and the likes of the Big Brother figure.

The cast of characters in George Orwell’s novel is as unique, engaging and well-developed as any reader could hope for. 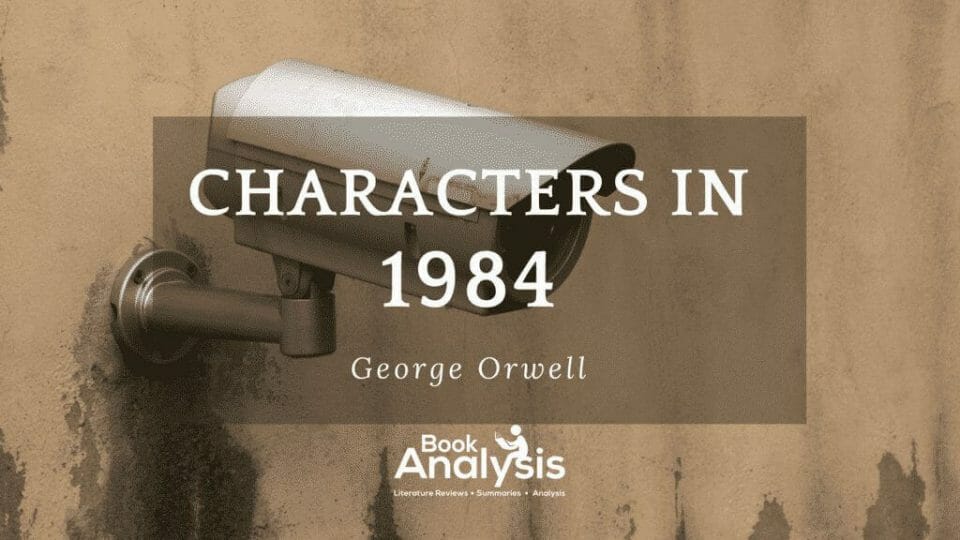 A small, fragile thirty-nine-year-old man, resident of Oceania and a minor member of the Party. He works at the Ministry of Truth but hates the totalitarian rule and repression which are integral parts of the governmental system. Winston secretly dreams of a revolution. After meeting Julia, he is able to share his innermost opinions openly, he’s also able to embrace love and affection in a way that is not tolerated by the Party.

Winston gains strength from this relationship but as a result, is arrested. After being tortured by the Party, he submits to the government’s tenants. The hatred he once held for the Party and Big Brother is replaced by unquestioning love, that which he pretended to hold at the beginning of the novel.

A young 26-year-old party member who works in the Ministry of Truth. Partway through the novel, she becomes Winston’s love and together they share in their hatred of the Party. Although she doesn’t want to live under party rule, she also doesn’t want to participate in a revolution. After the couple is arrested, Julia, who is also held and tortured in the Ministry of Love, is fundamentally changed by the experience. She no longer loves Winston, in fact, she wants nothing to do with him.

An intelligent and important member of the Inner Party with whom Winston wants to share his most dangerous thoughts. Winston comes to believe that O’Brien is on his side, and is willing to assist him in his efforts to push back against Party rule. O’Brien does not turn out to be the person Winston thinks he is. He turns Winston in for committing “thoughtcrime” and sending him on a path to be transformed into another subjugated, brainwashed citizen.

The dictatorial, god-like figure at the head of Oceania and the Party. He appears on TVs, posters, and coins. Most memorably, on posters that declare one is always being watched by “Big Brother”. Winston believes that Big Brother is not a real person, but instead, a fabricated figurehead created as a focus for the public’s adoration.

An old man who owns an antique/secondhand shop in the prole section of the city. He is initially kind to Winston and encourages his inquiries into the past. But, like most of the characters and spaces in 1984 Mr. Charrington has an ulterior motive. He turns out to be a member of the Thought Police.

An acquaintance of Winston’s who is one of the creators of the Eleventh Edition of the Newspeak Dictionary. Winston does not like Syme, but continues to speak with him because he is outspoken. At one point, Winston even thinks that Some will likely not live for much longer because he is not as careful with his words as he should be. Syme does eventually disappear.

One of Winston’s neighbors who Winston finds to be irritating and obnoxious. He is the father of two children, who are members of the Junior Spies. One child denounces her father to the police, stating that he spoke against Big Brother in his sleep. He is imprisoned in the Ministry of Love when Winston is taken there for interrogation and torture. Parsons professes his pride in his daughter for having followed Party doctrine.

Winston’s wife. She does not appear in the novel but Winston spends time thinking about her and her devotion to the party. He is bothered by the lack of real emotions the two shared and how she was only intimate with him in order to have children for the Party. In one of the most poignant moments of the novel, Winston admits to a passing desire he had to murder her while they were walking alone. She may or may not be alive somewhere else in Oceania.

Winston’s coworker who also ends up in prison with Winston at the end of the novel. He worked in the Records Department.

The leader of the rebellion against the party who never appears in the novel. Like Big Brother, his influence is felt by all. Some are terrified of the disruption he could bring to their lives, and outwardly denounce him as the Party demands, others like Winston look up to him as a figure of hope. He is more of a legend than anything else. By the end of the novel, it comes into question whether or not this figure ever existed, or if he was created by the Party in order to give them an ever-present enemy.

Three members of the Inner Party who were wrongly arrested and forced to confess to crimes they didn’t commit. They were executed by the Party. Winston becomes aware of their innocence through a newspaper clipping.