The Old Man and the Sea Summary 🎣

Hemingway’s Pulitzer Prize-winning novel, ‘The Old Man and the Sea’, opens with the main character, Santiago returning from his eighty-fourth day with catching a fish.

It is a short, moving novel that tells the story of an old, Cuban fisherman’s three-day struggle in the Gulf of Mexico as he tries to catch a large marlin. 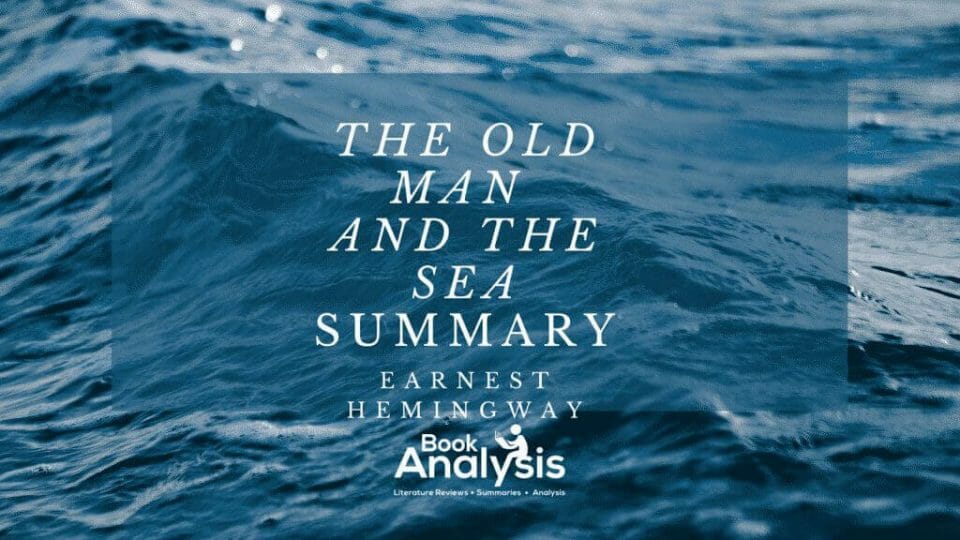 The Old Man and the Sea by Ernest Hemingway tells the story of an old Cuban fisherman, Santiago, and his quest to break his eighty-four-day streak of unsuccessful fishing. He spends time with a young boy he used to fish with, Manolin, and the two speak about baseball. Manolin cares deeply for Santiago and does what he can to improve his life. Santiago, the man to whom the title refers, heads out the next day in an attempt to change his luck.

Before sunrise the next day Santiago is on the water again, his eyes focused on a new, distant fishing spot. When a fish takes his line, and Santiago realizes how large it is, his struggle begins. Through miles of water and hours and days of struggle, Santiago suffers for what he hopes will be a success, all the while being reminded of what it means to be human.

The Old Man and the Sea Summary

Spoiler alert – important details of the novel are revealed below.

The Old Man and the Sea starts with the main character, Santiago, returning from a fishing trip, 84 days long, without catching a fish. Although downtrodden, the old man maintains hope his luck is going to change. His attitude is bolstered by the boy with whom he used to fish, Manolin. Unfortunately, by his parent’s orders, Manolin is no longer allowed to accompany Santiago out onto the water. They want their son to fish and learn from someone who is not struggling as the old man is at this time. The boat he’s moved to is much more prosperous, but the new fisherman does not inspire Manolin’s allegiance as Santiago has.

Manolin is devoted to the old man. He cares for him when he gets back from fishing, helps him carry in gear, and finds food for the two to eat together. The old man is desperately poor and is more than often unable to feed himself without Manolin’s help. The boy’s kindness shines through as he berates himself for not thinking of other ways he could better Santiago’s life. A passion the two share is baseball. They discuss upcoming games and their favorite player, Joe DiMaggio.

The next day, the old man wakes “as old men do” and walks to Manolin’s hut to wake him. Together they prepare Santiago’s skiff and he sails out into the waters. He determined the night before that he was going to sail farther than usual. Santiago sails so far as to enter into the Gulf Stream. As he moves through the water, he takes note of the wildlife around him, showing a clear appreciation for the natural world and all the creatures in it. Throughout the novel, the reader is told the story through Santiago’s thoughts. They often flit to his past, when he worked on a turtle boat and saw lions on a beach in Africa, and then return to his present moment. Santiago continues to remind himself to stay focused on the task at hand.

At noon that day, a fish takes the bait on one of his lines. The old man is very cautious, using all his knowledge, gained through decades of experience on the water, to know what to do with the line and when. The line was one hundred fathoms deep and the fish he hooked a marlin. Santiago knows immediately that he’s got a very large fish on his line but he isn’t sure how large. One hint of its size is the fact that the old man can’t get it pulled in. Rather, it starts to pull the boat out to sea. While this might frighten some sailors, the old man is nonplussed. He knows that no matter where he ends up he’ll be able to navigate back to the island. It’s a “long” island he states, and the lights are bright.

Over the next hours, and eventually days, the old man is pulled by the fish out into the sea. He does not tie the line off for fear that it will snap from the tension. Rather, he wraps it around his shoulders and back. His back begins to ache, but he knows he can bear it. He speaks out loud to himself, a habit that began after Manolin left his skiff. Santiago speaks on life, death and the brotherhood he feels with the fish on his line. Although he knows they are connected, and that the fish is a majestic creature he is determined to kill it. He wants to show the fish what man can do and he desperately needs something to sell.

One of the reoccurring themes in The Old Man and the Sea is that of the human body and it limitations. Santiago’s hands, the left, in particular, fail him. The left cramps up and he struggles for a time to get it to relax. But, he never panics. He knows he can bring the fish in. The struggle lasts for three days. Santiago manages to catch a fish and then a dolphin that had two flying fish in its belly, to eat.

Before the struggle has progressed for too many miles or days, the old man expresses his longing for the fish to jump. He just wants to see what “he’s up against”. It finally does and he is baffled by its size. So much so that he almost can’t believe what he’s seeing.

On the third day, Santiago is on the verge of giving up. His body is failing him, his mind is slipping and he starts to doubt his abilities. But, the fish is circling. He tries, again and again, to kill the marlin with his harpoon, and finally succeeds. A part of him mourns, as the fish was his brother. But he’s also proud of himself. He continues to wish, as he had since the struggle began, that Manolin was at his side.

The old man ties the marlin to the side of his skiff, as it’s too big to haul on board, and sets off home. For a time, he’s unable to take his eyes off the fish at his side. It’s incredibly large and beautiful and he worries over the reaction in the market. He doesn’t want this creature to be consumed frivolously, but he knows he has to sell it so he can feed himself.

In a grueling turn of events, but one that is not unpredictable, sharks begin to attack the boat. They follow the trail of blood the marlin is leaving in the water. In the first few Santiago is able to kill with the harpoon, but eventually, he loses it. He creates a makeshift weapon by attaching his knife to the end of an oar. With this, he kills more sharks but is unable to keep them from taking more and more of his fish. He stops looking at the fish, unable to bear its sight.

It takes a great deal of time for Santiago to make it back to the village, but when he does it’s clear that the entire fish has been devoured. All that’s left is a skeleton, the head, sword, and tail. He spends the next hours sleeping and wakes to find Manolin who is once again taking care of him. The villagers marvel at Santiago’s fish’s skeleton, no one has ever seen a fish that large. It was around 1500 pounds, if not more when Santiago caught it.

The Old Man and the Sea ends with Santiago sleeping peacefully, having read over the baseball scores, and dreaming about the lions playing on the African beaches.