George R. R. Martin is a writer who has always loved telling stories from a young age. His love for writing novels that challenge the concepts of morality and humanity has earned him a place among the best word architects in modern fantasy. 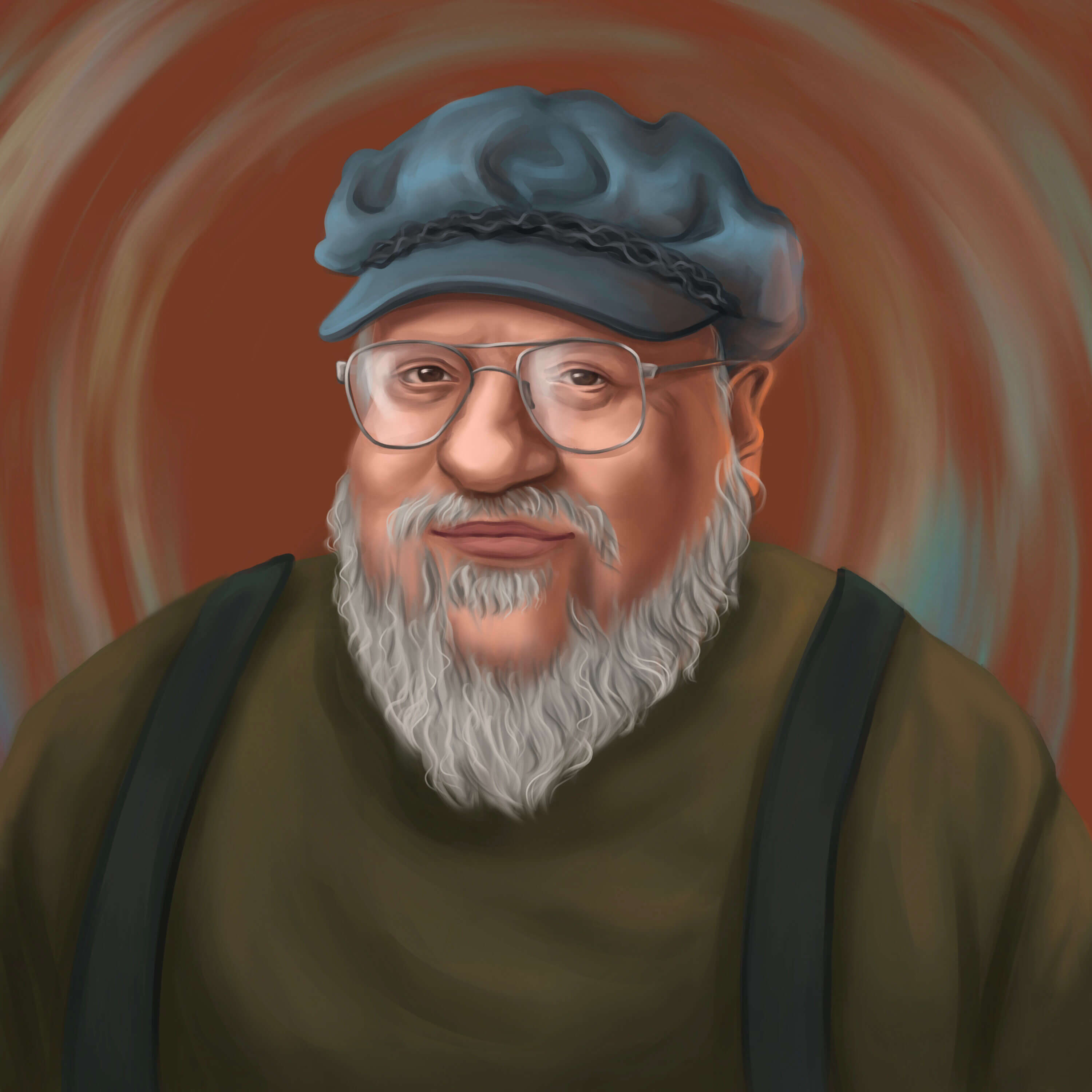 From a child writing about turtle stories to an author who wrote a delicately intricate story of lords, knights, kings, and dragons, George R. R. Martin is undoubtedly one of the best worldbuilding authors. His rapt attention to the delicate details of his characters, their mindset, and their view of the world makes him craft tales that resonate intensely with the reader.

‘A Game of Thrones’ is the first novel in George’s series A Song of Ice and fire. It tells the story of different characters Eddard Stark, Catelyn Stark, Jon Snow, Daenerys Stormborne, Arya Stark, Sansa Stark, and Bran Stark. The novel follows the characters as they navigate a world of dilemmas and hurdles. After Ned’s friend, Jon Arryn, dies, Robert Baratheon asks him to become the new Hand of the King.

On getting to King’s Landing, the capital of Westeros, Ned uncovers the truth that Robert’s wife had all her children by her brother, Jaime Lannister. After he learns of her infidelity, Cersei plans an accident for Robert, and he dies. She then puts her son on the throne as the King, and Ned loses his life.

Across the sea, Daenerys Targaryen, daughter of Aerys II Targaryen, the Mad King, gets married off by her brother, Viserys, to Khal Drogo. He tries to get Drogo’s army but becomes impatient and loses his life. In the North, Robb Stark raises an army against King’s Landing and successfully captures Jaime Lannister. He gets declared the King of the North.

Jon Snow, the bastard son of Ned, joins the Night’s Watch and becomes the commander’s apprentice. He tries to run away from the Watch after learning of his father’s death, but he gets stopped by his friends. Arya escapes Lannister soldiers trying to capture her after her father gets arrested. She lives on the street for some days, and when her father is about to get beheaded, Yoren takes her away, preventing her from witnessing her father’s death.

A Clash of Kings

‘A Clash of Kings’ is the second novel in A Song of Ice and Fire. The story continues from its predecessor and shows a chaotic Westeros after the death of Robert Baratheon. With Jeffrey now King and Ned Stark dead, Westeros becomes a broken kingdom as Robb Stark gets crowned King. Robert’s brothers, Renly and Stannis, claim the Iron throne, and Balon Greyjoy declares himself King of the Iron Islands.

Stannis publicizes his claim that Joffrey is a bastard, and his brother Renly gets the support of the House of Tyrell and marries its lord’s daughter Margaery. Jon and the men of the Night’s Watch go beyond the wall, where they learn that the Wildlings are uniting under one man, Mance Rayder.

Daenerys Targaryen travels south accompanied by Jorah Mormont and finds a problem getting help as she refuses to give up her dragons. Daenerys visits the warlocks of Quarth, who show her many confusing visions and threaten her. Before they succeed, her dragons burn down the warlocks, and she begins her journey back to Pentos.

A Storm of Swords

‘A Storm of Swords’ is the third novel in George R. R. Martin’s epic series. The story kicks off from where the previous stopped. With Westeros now in the War of the Five Kings, chaos overshadows the kingdom. Robb’s mother, Catelyn, releases Jamie Lannister to secure the release of her daughters Sansa and Arya. Employing Brienne of Tarth to escort Jamie back home, Roose Bolton secretly kidnaps them and cuts off Jaime’s sword hand.

Roose eventually releases Jaime, and he and Brienne travel back to King’s Landing. The band of the Night’s Watch sent by Lord Mormont faces off against White Walkers. They suffer heavy casualties, and soon, they rebel against Lord Mormont, but Samwell Tarly escapes.

At Slavers Bay, Daenerys Targaryen learns that slave armies get sold in Astapor. She then buys an army of warrior-eunuchs called the Unsullied with her dragon. She then orders her dragon to turn on the slavers and commands the army to free everyone. Daenerys soon uses the help of two knights to sack the city of Meereen. She releases everyone and puts the city’s rulers to death.

‘A Feast for Crows’ is the fourth novel in A Song of Ice and Fire. It takes off from where the previous stopped. With Robb, Balon Greyjoy, and Joffrey dead, the War of the Five Kings slowly ends. Stannis Baratheon heads off to fight the invading Wildling tribes on the northern wall, and Jon Snow becomes the 998th Lord Commander of the Night’s Watch. Tommen, Joffrey’s brother, becomes the King under the regency of his mother. Cersei sends out Brienne and Jaime to find Sansa Stark, who is hiding in the Vale, and gets protected by Petyr Baelish, the new Protector of the Vale.

A Dance with Dragons

‘A Dance with Dragons’ is the fifth novel in A Song of Ice and Fire. It takes off from the previous story and continues the story of the chaos in Westeros. Having killed his father, Tywin Lannister, Tyrion gets smuggled to the city of Pentos. He gets kidnapped by Daenerys’s disgraced advisor, Jorah Mormont, who planned on appeasing Daenerys with Tyrion as a gift. In the Night’s Watch, a mutiny against Jon Snow makes some of his men stab him.

Daenerys bans slavery in Meereen but faces problems with her dragons, who have becomes increasingly violent. She cages two, but the biggest of the three, Drogon, flies away. After she opens the fighting pits of Meereen for gladiator combats, Drogon gets attracted to the noise and returns. To calm him, Daenerys climbs Drogon, and he flies away with her.

In King’s Landing, chaos ensues as Cersei gets arrested by the Faith, a religious group, on charges of fornication and conspiracy. She confesses to the lesser crimes of fornication and conspiracy and gets forced to walk naked across the city. With her uncle, Kevan Lannister, and Grand Maester Pycelle in control of the kingdom, Varys reappears and murders Pycelle. He reveals that he has been waiting for the right time and has plotted for the Lannisters to turn against each other so that they can destroy themselves and the real King, Aegon Targaryen, can ascend the throne.

Dying of the Light

‘Dying of the Light’ is a science fiction novel by George R. R. Martin. It tells the story of many characters on the planet of Worlorn, a dying rogue world drifting away from its neighboring stars into dark space which does not support life. Fourteen cities get built on Worlorn when it passes close to a red giant star, but after the planet drifts away, they begin dying too. Chaos sets in, and many of the cities start fighting wars. Before the story ends, many characters lose their lives, and the planet drifts into the never-ending sea of cold space.

‘Fevre Dream’ is a novel that tells the story of Abner Marsh, a Mississippi steamboat captain who, after a financial crisis, meets Joshua York, a wealthy man. Joshua builds a better boat, and he and Abner get into a weird business arrangement as they become co-captains of the ship. Soon, the passengers and Abner’s crew begin noticing strange things with Joshua and his unusual friends. When Abner confronts him about it, he learns that Joshua is a vampire investigating deaths across the Mississippi.

Joshua tells Abner of a portion he created to cure the bloodlust of vampires. However, Damon Julian, Joshua’s rival, learns of his plans and boards the ship. Damon overpowers Joshua and becomes the new captain of Fevre Dream. Abner escapes and later tries fining his ship but quits. Years later, he gets a call from Joshua, and together, they confront Damon and defeat him. The novel ends with Joshua curing vampires’ bloodlust. After Abner dies, vampires begin taking pilgrim journeys to his grave as a symbol of respect for his help in helping them with their bloodlust.

Who is a better writer between Stephen King and George R. R. Martin?

While Stephen King and George R. R. Martin are phenomenal writers, they have differences that set them apart. George is an architect that builds his stories from bottom to top and shows the complexity in storytelling and characterization. Stephen King is a wordsmith who uses suspense and excellently crafted sentences to give the reader a 360-degree view of the events in his story. A Downside to George’s writing is his speed.

Is there a prequel to Game of Thrones?

HBO recently announced a new TV show that will be the prequel to Game of Thrones. House of the Dragon is to get aired on August 21, 2022.

Many fans of ‘A Song of Ice and Fire’ have expressed their displeasure at George R. R. Martin’s sluggishness. The reason for George’s slow pace is the complexity of his novels. George’s vast world poses a complex problem where he would have to trim down the story and pay attention to many characters and how they interact with the story.

George’s mother was a wealthy woman who got affected by the Great Depression. The economic collapse made her lose all her wealth, and George had to grow up with his great-grandmother for the first four years of his life.