‘Adam Bede’ chronicles the relationship struggles of the character Adam Bede who is in love with beautiful but selfish Hetty Sorrel who in turn loves Arthur Donnithorne. The love triangle results in a hideous crime with grave consequences and lessons for them all. 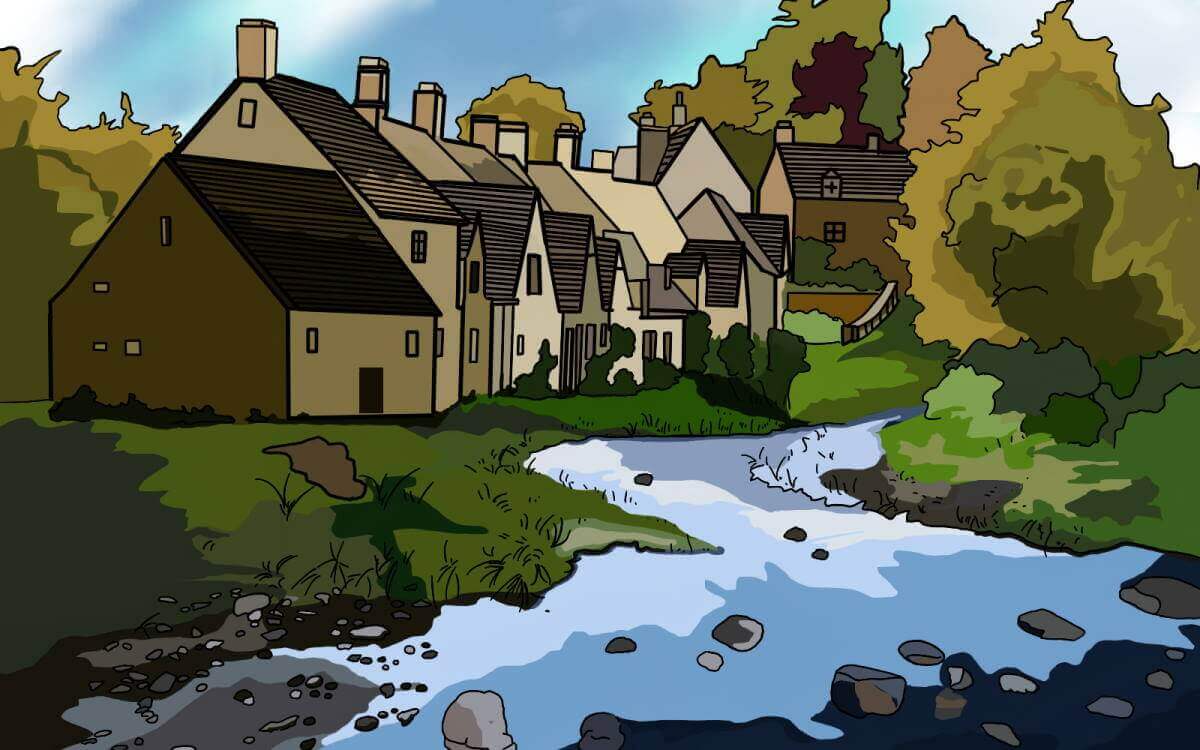 Adam Bede begins in June 1799 with Adam Bede and his colleagues working in Jonathan Burgess’s workshop as they discuss religion and the coming of a Methodist preacher to the village of Hayslope. The first chapter ends as they all disperse to their several destinations at the chime of the clock that marks the end of the day’s work. It is a captivating opening chapter where the author uses the ink like an Egyptian sorcerer to show the characters in their elements and concurrently reveal the characters’ dispositions, work ethics, and beliefs. The story progresses from there to tell us about the characters’ families, love life, and social status as they navigate their daily lives.

Adam Bede and his colleagues are carpenters in a workshop in the village of Hayslope. They discuss the coming of a Methodist preacher to the village along with other religious views. The villagers converge out of curiosity as they are not used to seeing a female preacher.

Seth Bede, a fellow Methodist professes love to the preacher who is Dinah Morris but she turns him down.

Adam and Seth find their alcoholic father dead in a brook and it puts the family in mourning. Dinah pays a condolence visit to the Bedes and their mother Lisbeth Bede takes a liking to her.

Hetty Sorrel, the niece of Mr. Martin Poyser is seduced by Arthur and they have trysts in the woods. Adam who is also in love with Hetty finds out about Hetty and Arthur’s affair. He convinces Arthur to do right by Hetty and break up with her and Arthur agrees. Adam begins to court Hetty after the breakup and they plan their wedding.

Adam returns to Hayslope and plans to go to Ireland in search of Hetty but is informed that Hetty has been arrested in England for a crime.

The people of Hayslope recover from Hetty’s crime and scandal and continue their normal life. Dinah and Adam fall in love but the love puts a strain on their friendship and the story ends with how they learn to come to terms with their feelings.

Adam Bede begins in a workshop where Adam, his brother Seth, Wiry Ben, and other carpenters discuss religion and the coming of a female Methodist preacher to Hayslope as they work. After work, many of the villagers converge at the green fields to listen to the new Methodist preacher except Adam Bede who heads home.

The preacher is Dinah Morris, the beautiful but demure niece of Mrs Racheal Poyser. The preaching is sincere and unpretentious and the villagers take a liking to Dinah without getting converted by her preaching. Seth Bede walks Dinah home after the preaching and professes his love to her but she turns down his love giving the reason that she wants to dedicate her life to doing God’s work as a preacher.

The news of Adam’s father’s death reaches the rector through the parish clerk, Joshua Rann as he goes to complain about the new preacher in Hayslope. The rector, Mr. Irwine dispels Joshua Rann’s agitation about the methodist preacher and decides to visit The Hall Farm where the preacher lives out of curiosity to meet her. Mr Irwine is joined by Arthur Donnithorne, a dashing young man from a noble family who had just returned from the army, in the vist to the Hall Farm.

At the Hall Farm, Arthur finds he is attracted to Hetty Sorrel the orphaned niece of Mr. Poyser who lives in the Hall Farm, and plans a rendezvous with her as Mr. Irwine engages Dinah in conversation. From the visit, Dinah learns of the death of Seth and Adam’s father and goes to their cottage to pay condolence.

Lisbeth Bede who hardly warms up to strangers takes a liking to Dinah and they become friends. Dinah and Adam meet for the first time on her condolence visit to the cottage. As Dinah returns to the Hall Farm, she meets Hetty and warns her of a coming tragedy that may come to her in the future.

Hetty’s mind is preoccupied with Arthur’s seduction and she dreams of marrying him and becoming an upper-class lady who can have all the finery she desires. She makes a detour from The Chase where she is learning sewing and meets with Arthur in the woods as much as she can. Arthur on his part feels guilty for seducing young Hetty but repeatedly breaks his resolve to avoid her.

The author begins this phase with a chapter that pauses the story and directly interacts with the reader on realism and other philosophical subjects like beauty, art, and empathy and also narrates future interactions with the character Adam Bede.

Arthur Donnithorne throws a party on the 30th of July, 1799 to celebrate his 21st birthday. There, Mr. Poyser makes a toast of goodwill to Arthur and they celebrate with a feast and some games. At the party, Arthur announces that Adam Bede has agreed to manage their woods for them and the villagers toast to Adam as well.

Hetty is upset with Arthur for ignoring her at the party but manages to hide her feelings well. She dances with Adam and her charms fill Adam with hopes that she could love him.

Adam finds Hetty and Arthur in a lovers’ embrace in the woods and gets jealous and furious. Adam and Arthur get into a physical fight when Hetty leaves hurriedly. After the fight, Adam insists that Arthur must break up with Hetty because there is no prospect of marriage between them as Hetty and Arthur are from different social classes. Arthur agrees to write the letter and gives the letter to Adam to deliver to Hetty.

Hetty receives the letter and is heartbroken to learn that Arthur has broken up with her and departed to join the army. She shields her heartbreak from her family and eventually agrees to marry Adam. Meanwhile, the Poysers fear a possible eviction from the Hall Farm because of a heated confrontation between Mrs. Poyser and old squire Donnithorne.

The Bedes and The Poysers begin preparations for the wedding between Adam and Hetty as the date for the wedding draws near. But, Hetty discovers to her consternation that she is pregnant for Arthur and devices a plan to run away in search of him before her family finds out about the pregnancy.

Hetty convinces Adam and her family that she is going to Snowfield to visit Dinah but tries to go to Windsor in search of Arthur instead. She is naive and ignorant of the world outside her village and quickly exhausts her money in the trip. She manages to get to Windsor nonetheless but is disappointed to learn that Arthur has left for Ireland and that her trip to Windsor is fruitless. She sells the fancy earring and locket Arthur gifted her in the past and uses the money to feed herself as she wanders about from town to town, refusing to go home for shame about her pregnancy.

Back in Hayslope, Adam and the Poysers begin to worry about Hetty’s whereabouts and Adam resolves to visit Dinah and find out what is keeping Hetty. Adam gets to Snowfield and is told that Hetty never got to Snowfield and that Dinah had gone out of town to evangelize.

Adam begins to search for Hetty but returns to Hayslope without success. Then he resolves to go to Ireland to where Arthur is, believing that Hetty is with Arthur but he keeps all this information to himself. Later, he resolves to confide in Mr. Irwine before departing for Ireland but Mr. Irwine informs him that Hetty is not in Ireland as he has a notice from the court that someone that matches Hetty’s description is in prison for killing her child. Adam is deeply troubled by this news and travels to Stoniton where Hetty is imprisoned to see if he can be of help to her but he lacks the courage to visit Hetty in prison.

Back in Hayslope, old Squire Donnithorne dies, and Arthur is summoned to come back home.

Hetty goes to trial but stays silent throughout the proceedings, refusing to identify herself or admit that she gave birth to a baby. The court finds her guilty and sentences her to death by hanging. Dinah learns of the trial and verdict and visits Hetty in prison where she preaches to Hetty and Hetty eventually confesses to abandoning her child in the woods.

Arthur has returned to Hayslope and learns about Hetty’s case from a letter written to him by Mr. Irwine. He rushes off to Stoniton and with his influence secures a change of verdict for Hetty, Hetty is sent to exile instead of being hanged.

It is the year 1801, life at Hayslope returns to normalcy after Hetty’s crime and scandal. Dinah begins to fall in love with Adam and everyone notices except Adam himself. Dinah resolves to return to Snowfield to continue her life as a preacher.

Lisbeth Bede tells Adam that Dinah loves him and Adam is bewildered by the realization that he loves her too. Adam professes his love to Dinah and while Dinah admits that she loves him too, she doubts that she would be happy to marry him and abandon God’s work. She asks for Adam’s patience as she seeks clarity and a sign from God. Dinah returns to Snowfield without accepting Adam’s proposal.

Adam visits Dinah in Snowfield and Dinah sees his visit as a sign from God, she finally admits that her life cannot be complete in doing God’s work without Adam in her life. Adam and Dinah get married.

The year is 1807, Dinah has stopped preaching due to a Conference that resolved to prohibit women from preaching. Dinah and Adam are happily married with two children and Seth is a doting uncle to the children, one of whom is named after the late Lisbeth Bede.

Adam meets Arthur again who has returned to Hayslope from the army and is recuperating from an illness. They reconcile and become friends again as they mourn the death of Hetty in exile.

What is the plot of Adam Bede?

Adam Bede‘s plot is about Adam Bede, a poor carpenter who falls in love with a beautiful but shallow girl called Hetty and plans to marry her. But before their wedding, Hetty runs away and Adam later discovers to his horror that Hetty got pregnant for a gentleman named Arthur and killed the baby by exposing the baby to cold in the woods.

How long is Adam Bede?

Adam Bede is about 500 pages long. It has fifty-five chapters and an epilogue. The chapters are grouped into six books, Book One to Book Six and each book captures major progress of events in the novel.

How does Adam Bede end?

Adam Bede ends happily for the title character Adam Bede, after the heartbreak and shock of Hetty’s crime, he falls in love again with the kind preacher Dinah and they have two children together. Hetty dies in exile. Seth is a happy brother and uncle to Adam Bede’s family and Arthur Donnithorne returns to Hayslope a more sober and better man.