Mary Ann Evans who writes with the pen name George Eliot is a famous
English novelist who wrote many novels that make up part of Victorian literature and influence British culture. In pop culture, she is a stellar example of a female writer that used a masculine pseudonym to have an objective appreciation of her novels. 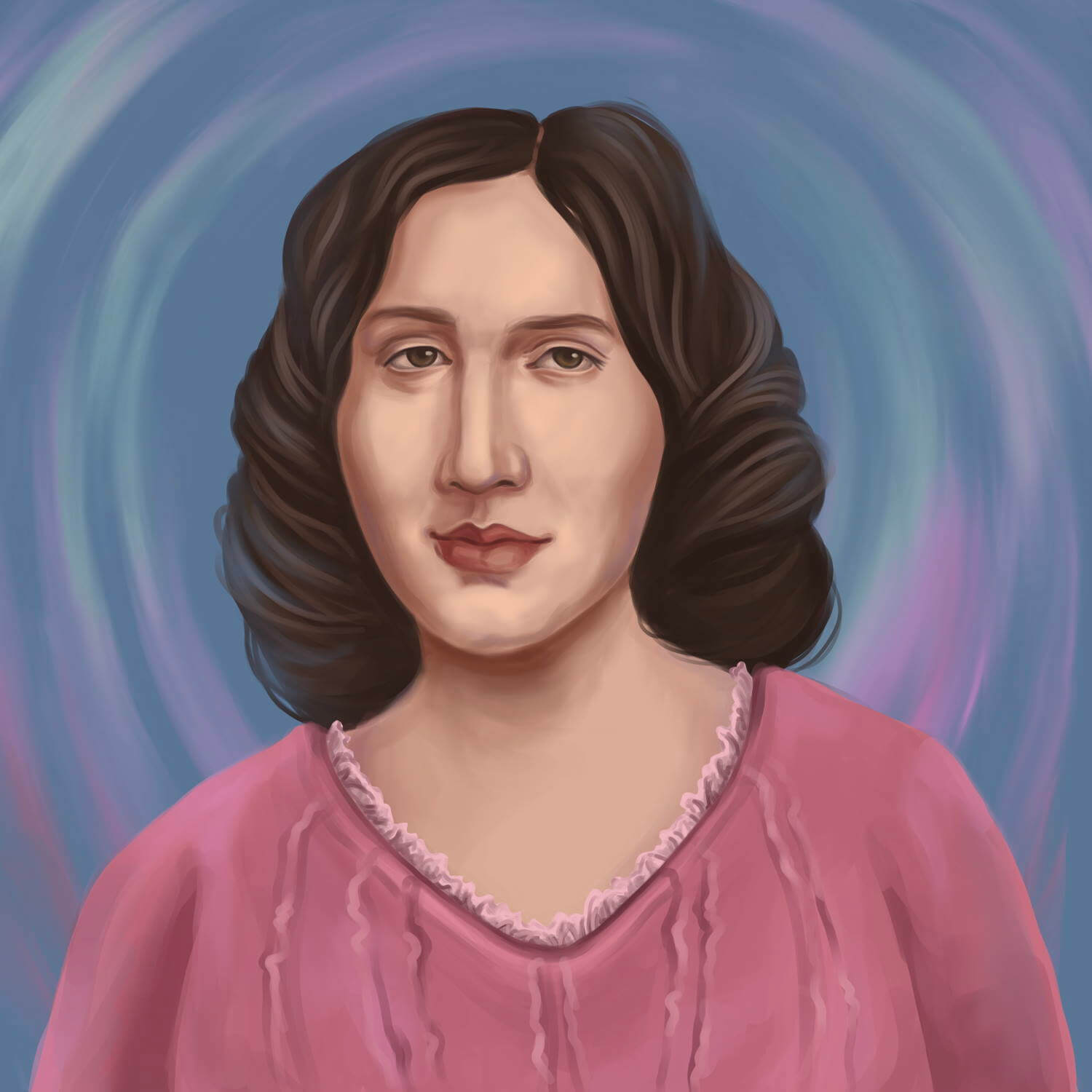 George Eliot is a nom de plume that is well known for realistic novels in the Victorian era. The name is inscribed as the author on the cover of seven novels and a collection of short stories. Mary Ann Evans, the woman behind the pen name George Eliot, has gifted the world poems, reviews, and novels so rich in themes that they remain relevant even after tens of decades. Let’s take a look at some of the most famous novels by George Eliot.

Eliot’s very first novel gave her an encouraging debut. Adam Bede is about a twenty-six-year-old carpenter, loved and admired by many. Adam begins to court a beautiful but shallow girl called Hetty but Hetty secretly has an affair with a dashing soldier from the gentry named Arthur Donnithorne. The love triangle results in complications that would lead to a crime, exile, death, and heartbreak.

Mill on the Floss

Mill on the Floss is George Eliot’s second novel published in 1860. It was preceded by Adam Bede the first of the George Eliot novels. Mill on the Floss narrates the story of Maggie Tulliver and the challenges of balancing her familial ties with her romantic relationships. The heart of the story lies in her love-hate relationship with her brother Tom Tulliver whose composition of character is entirely different from Maggie’s.

The story is set in the fictional village of St Ogg’s as nine-year-old Maggie relishes her childhood in her family mill Dolcote Mill which is located at a junction between the River Floss and River Ripple. The dynamics of their relationship get complicated as they face several family crises such as bankruptcy, the loss of the Dolcote Mill, and the death of their father.

Some of the complications arise as Maggie comes of age and begins to form romantic relationships. First, Maggie forms a friendship with Philip Wakem and this bond gives her an avenue to escape the austerity of her own life, but eventually, Tom who despises Philip finds out about the friendship and forces Maggie to renounce Philip. Tom and Maggie’s relationship takes a turn for the worse when Maggie elopes with her cousin’s suitor Steven Guest, although Maggie refuses to marry Steven after the elopement, Tom refuses to forgive her upon her return and harshly sends her away.

In the end, Maggie and Tom reconcile as they both drown to their death in a flood.

The novel has themes of gender discrimination and family relationships. Critics suggest the author, Mary Ann Evans might have been projecting her relationship with her brother Isaac Evans in The Mill on the Floss.

Silas Marner is a melancholic story but with a happy ending. It is George Eliot’s third novel published in 1861. The novel is centered on the protagonist Silas Marner, who losses faith in humanity and in God due to a betrayal and an unjust treatment that leaves him heartbroken and in despair, and how fate smiles on him with time and restores his lost faith.

Silas Marner is a linen weaver and a member of a Calvinist congregation in a fictional town called Lantern Yard. He is accused of stealing the church money while watching over their ill deacon. Silas pleads his innocence but is implicated in the case by his pocket knife which was found at the scene of the theft and the discovery of the empty bags that once contained the money in Silas Marner’s house.

Silas maintains his innocent plea and suspects his best friend, William Dane has framed him up because William had borrowed Silas’ pocket knife shortly before the discovery of the theft. The congregation agree to cast a lot to determine whether Silas would be proven innocent and Silas agrees to this, hoping that God would vindicate him and direct the lot to result in his favor. But the lot turns out against Silas’ innocence. Silas Marner’s fiancee breaks off their engagement and marries William Dane instead.

Betrayed and shattered, Silas Marner moves to the Midland village of Raveloe where he begins a new life, continuing in his craft as a linen weaver but isolating himself from the villagers. The villagers of Raveloe see Silas as a miserly recluse while Silas finds comfort in the gold coins he accumulates.

On a foggy night, Dunstan Cass, the son of a wealthy landowner in Raveloe, steals all of Silas’ gold coins but falls into a stone quarry as he makes away with the money. Silas is heartbroken again when he discovers that his gold coins have been stolen. The villagers help him search for it but it yields no success. Duncan Cass disappears around the same time but no one makes a connection between the two incidents because Dunstan is a prodigal son that is known to disappear on occasion.

Meanwhile, Godfrey Cass, the older brother to Dunstan hides a big secret. He is married to Molly, an opium addict from another town. Godfrey hopes no one discovers this secret as he intends to marry Nancy Lammeter a respectable girl from a middle-class family. Molly comes to Raveloe with her little daughter, intent on revealing Godfrey’s secret to his family but falls unconscious in the snow while her toddler daughter strays off to Silas’ hut.

Silas finds the little girl in his hut and at first mistakes her gold curls for his lost gold. When he realizes she is a little girl, he follows her trail and it takes him to where Molly is lying dead. He reports the incident and Godfrey on recognizing Molly thinks it is convenient for his secret and does not identify her. In the absence of any claim on the little girl, Silas adopts her and names her Eppie.

Silas begins to care for Eppie and grows to love her. Dolly Winthrop, Silas’ neighbor helps him in taking care of Eppie while Godfrey Cass occasionally supports him with money.

Sixteen years go by and Eppie blossoms into the belle of Raveloe while Godfrey Cass, who had succeeded in marrying Nancy Lammeter, remains childless in the marriage. Construction commences at the stone quarry and Dunstan Cass’ skeleton along with Silas bags of Gold coins are found in the stone quarry. The bags of gold are returned to Silas but shortly after, Godfrey Cass confesses to being Eppie’s biological father and begs Eppie to return to him. This makes Silas Marner’s gold lose value to him because he cannot imagine a happy life without Eppie as his daughter. Eppie refuses to leave Silas and it makes him overjoyed.

Silas revisits Lantern Yard but finds none of the milestones or people he once knew. The town has been taken over by a factory. Therefore, he never gets to know the fate of all those that had treated him unjustly.

Eppie marries Aaron Winthrop and they all live together happily in Raveloe.

The most important theme in this novel is the value of love among humans over material wealth and it is one of the most enjoyable reads from George Eliot.

Middlemarch, A Study of Provincial Life

Middlemarch, A Study of Provincial Life is one of the most acclaimed novels by George Eliot. It was published between 1871 and 1872 in eight volumes. The story is set in a fictional English village called Middlemarch between 1829-1832.

The plot centers around Dorothea Brooke, an idealistic, intelligent nineteen-year-old who marries a much older man with hopes of joining in his research and getting intellectual mentorship from him; Tertius Lydgate, a medical doctor whose career is threatened by his idealism and progressive ideas; Fred Vincy and his sister Rosamund, children of the mayor who languish in the hope of finding fortune in inheritance or marriage; Mary Garth a plain but kind young lady whom Fred Vincy is in love with; and Nicholas Bulstrode, a wealthy banker who is hypocritic in his religiosity and hides an unsavory past.

The novel follows their lives as it explores the themes of idealism, religion, and social stratification among others.

Published in 1876, it is the last of George Eliot’s novels. The plot of Daniel Deronda intertwines the stories of two characters–the eponymous character Daniel Deronda and Gwendolyn Harleth. The story is set across various countries in Europe including Germany, England, and Italy in the years 1865 and 1866.

The novel begins in 1866 with Daniel observing Gwendolyn as she loses all her money in a game. The next day, Daniel redeems Gwendolyn’s necklace which she pawned for money and sends someone to return the necklace to her. Gwendolyn is grateful to Daniel as she needs the money to return home to her family.

From there, the story splits into flashbacks to 1865 detailing Gwendolyn’s family struggles and Daniel Deronda’s ambiguous family history.

Daniel Deronda gets introduced to the Jewish community through Mirah Lapidoth who he rescues from a suicide attempt. While helping Mirah trace her lost family members, Daniel meets Mordecai, a Jewish visionary passionate about the Jewish people and their identity. Mordecai tries to make Daniel join in his vision and cause but Daniel has reservations about joining a cause he believes he has no connection with.

Eventually, Daniel traces his ancestry and discovers he is Jewish and that motivates him to follow Mordecai’s cause fully.

George Eliot addresses her recurring theme of family, gender, and social stratification then a novel theme of Semitism in Daniel Deronda.

What is George Eliot’s real name?

What is George Eliot’s most famous work?

George Eliot’s most famous work is her first novel Adam Bede which was so well received that even Queen Victoria read and commended it in her journal. The novel was published in the year 1859 by Blackwood and Sons Publishers and it went through eight printings within the space of one year.
It also had radio and television adaptations that starred some of Britain’s most popular actors.

Who was George Eliot’s lover?

George Eliot aka Mary Ann Evans’ lover was George Henry Lewes. They lived as a couple for twenty-four years but could not get married as George was already married in the eyes of the law and could not get legally divorced from his wife although separated from her. George Henry Lewes died in 1878 and in 1880, Mary Ann Evans married John Walter Cross.

Why did George Eliot change her name?

George Eliot’s birth name was Mary Ann Evans but she changed to George Eliot as a pen name for her novels to have her novels critiqued independently from her person and to protect her private life from public scrutiny. Also, gender played a role in her adoption of a pen name because female writers were frowned upon by some members of the society, and books from female writers were often not critiqued objectively, therefore, she adopted George Eliot who is a masculine pen name.