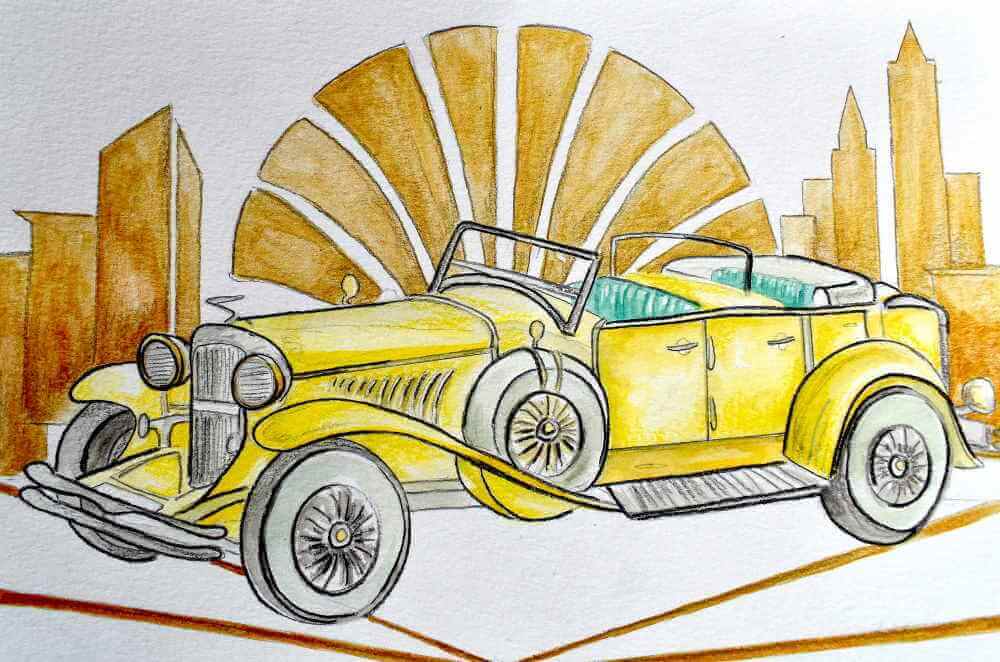 Within ‘The Great Gatsby,’ F. Scott Fitzgerald taps into several important themes. These include the American dream, and its decline, as well as wealth, class, and love.

‘The Great Gatsby’ follows Nick Carraway, who meets the mysterious multimillionaire Jay Gatsby after moving to New York. He gets wrapped up in Gatsby’s dreams and his cousin’s difficult marriage, all while learning about the pitfalls of wealth and the truth of the American dream.

Wealth is one of the most important themes Fitzgerald’s characters contend with within The Great Gatsby. Specifically, he draws a contrast between the aristocracy, those with old money like Daisy and Tom, and those with new money, like Gatsby. They live different lives and consider one another in different lights. But, both types of wealth corrupt in the same way. As the money amasses, their consideration of other people decreases.

Fitzgerald provides a great example of this at the end of the novel when Daisy and Tom move away to a new home rather than attend Gatsby’s funeral or deal with the consequences. Instead, they use their money to keep other people at a distance and get whatever they want out of life.

This theme is central to Gatsby’s understanding of the world and the judgments Nick makes about the future at the end of the novel. It is a set of ideas that suggest that anyone who works hard can find success in the United States. Gatsby rose from poverty up to the level of a multi-millionaire. But, when it came to what he really wanted in life, he failed. He spent his whole life thinking that if he just made enough money, he’d be able to convince Daisy to love him, and he’d have everything he wanted. But, he couldn’t retrieve his relationship with Daisy, and his pursuit of it led to his death.

There are a few different depictions of love and relationships in The Great Gatsby, and none of them are ideal. There is Gatsby’s unending love for Daisy, George’s love for his wife, Myrtle, Tom and Daisy’s relationship, and Nick’s relationship with Jordan. Gatsby’s goal to bring Daisy back into his life is one that’s built on an idealized image of the latter, one that fails to fulfill itself in reality.

Gatsby loves the idea of Daisy and thought of possessing her more than he does the person. The same can be said of Tom’s consideration for his wife. He wants to keep her as a commodity and as a symbol of his own status. But he doesn’t love her. He continually cheats on her and doesn’t attempt to hide it. Nick’s fleeting relationship with Jordan is emotionally distant. There isn’t enough emotion on either’s side for it to be anything other than a passing distraction.

Analysis of Key Moments in The Great Gatsby

The tone throughout The Great Gatsby is in part sympathetic, scornful, and judgmental, depending on the moment. The former is the primary tone when the novel comes to a close, and Nick considers the tragedy of Gatsby’s death and what he did and didn’t accomplish. The details of Gatsby’s parties, the relationship between the men and women there, and Nick’s own cousin, Daisy, and her husband, are all addressed with a more scornful/judgemental tone. Nick is amazed by much of what he sees, but he’s also appalled by how these men and women treat one another.

Fitzgerald’s style of writing is often wry, filled with figurative language and interesting imagery. Fitzgerald often uses long sentences, starting with one topic and ending with another. He uses sophisticated language and doesn’t back away from more lyrical passages, such as the final lines of the novel:

So we beat on, boats against the current, borne back ceaselessly into the past.

This final line is also a good example of how Fitzgerald uses figurative language. It’s an example of a metaphor comparing humankind’s desire to reach into the future and find a better life to a boat being beaten back by the current. Some of the other examples of figurative language in this novel include similes, symbolism, and personification. For example, in Chapter 2 when Fitzgerald uses the following lines:

This quote from The Great Gatsby is an example of personification. The eyes are described as looking down over everyone even though they’re on a sign.

The green light is perhaps the most important symbol in The Great Gatsby. It sits at the end of Daisy’s dock, and Nick catches Gatsby staring at it towards the beginning of the novel. It represents the life Gatsby is trying to create for himself and the role Daisy plays in it. The light is guiding him into the darkness as the end of the novel reveals.

Doctor T. J. Eckleburg’s eyes are another prominent symbol in the novel. They are a pair of eyes on a faint billboard over the valley of ashes. Fitzgerald personifies them (see above quote), turning them into God’s eyes. They watch the terrible events playing out below without intervening. They’re watching but remain empty.

What does Jay Gatsby symbolize?

He represents the American dream and its dissolution in the 1920s.

What the three main themes in The Great Gatsby?

Why did nobody go to Gatsby’s funeral?

No one went because no one had a true connection to the man. The only people around him were those who were using him for his wealth. Once he died, he had no value to them.

What is the main message of The Great Gatsby?

The main message of the novel is that the American dream is a fantasy. No one can have everything. One might also consider the fact that wealth corrupts all those who obtain it as the main message.

How did Gatsby get rich?

He got rich through illegal means, including bootlegging and other deals with organized criminals.